I thought I’d do a quick tour of the main spices we use in Gujarati food which most Gujaratis would keep in a ‘Masala Dablo’ or spice tin.

My masala dablo was part of my dowry along with other household items like my ‘velun’ (rolling pin), ‘lodhi’ (chapatti frying pan) and other ‘dabla’ (tins).  It’s quite special to me and sits on my cooker ready to use everyday. 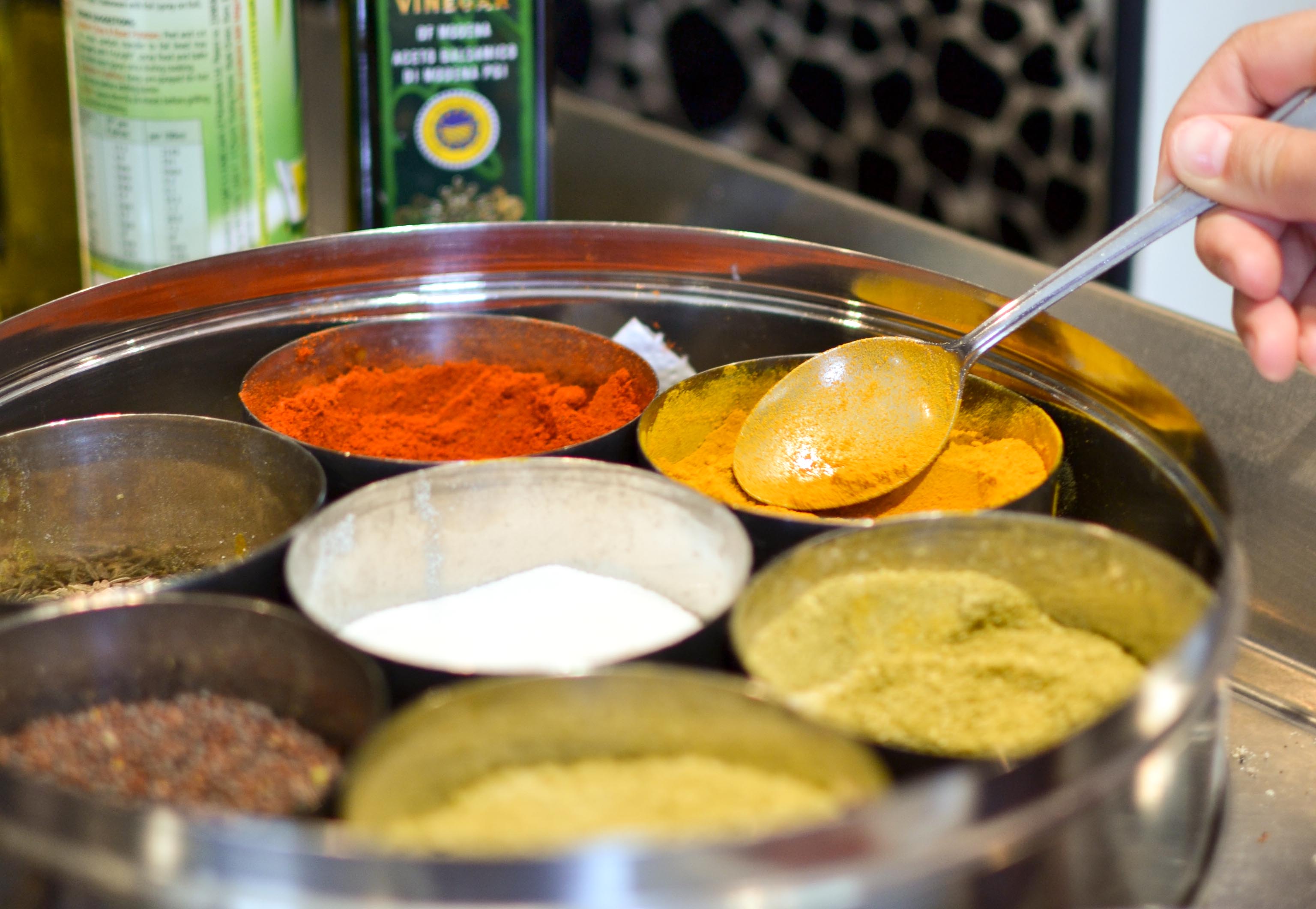 So what spices do I put in there? 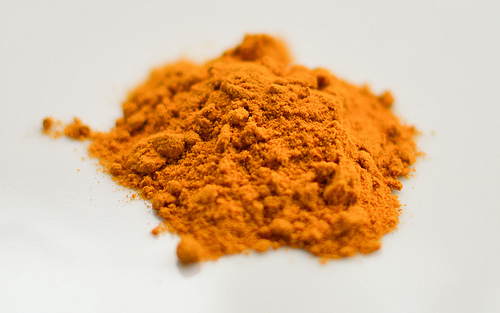 This really is a wonder powder.  It’s a natural antiseptic and brilliant for rubbing onto cuts and grazes to help the healing process.  As a child I also had it with honey or in milk to help sore throats heal.  It’s only used in small quantities in powder form so don’t buy a large bag.  It keeps for ages and brings mainly colour to dishes. The flavour is slightly peppery but also a little bitter if it’s eaten on its own. 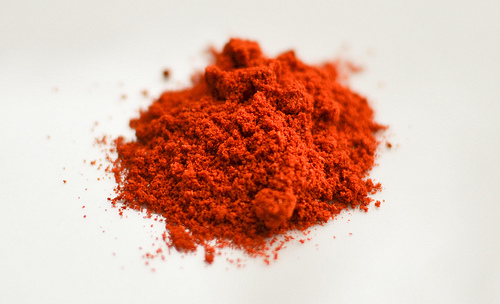 Most Gujarati dishes use red chilli powder though there are times when I have used fresh red chillies too.  The difference is the depth of flavour you want to get.  Fresh chillies will obviously be more fragrant but you’ll never really be sure of the heat they will bring to your food so you may add too many or too few.

Using the powder will give you a reliable heat level.  There are different strengths of powder so I would suggest a medium if you follow any of the recipes on this blog as that’s what I use. 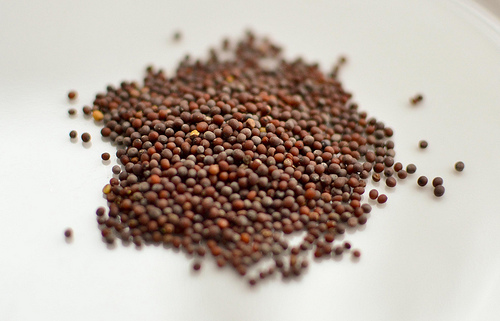 These, along with the cumin seeds below are essential for the tempering element of most Gujarati recipes.  Tempering is the process of heating spices or seeds in oil to release their flavour.  There is also a little heat in these seeds (the same kind of flavour you find in mustard) which is why you don’t need a lot. 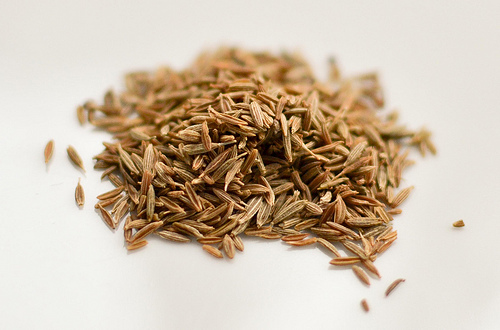 These are harvested from a plant called  Cuminum cyminum from the parsley family.  They have such a wonderful aroma and the slightly peppery flavour is released when toasted or heated in oil.

I only ever use table salt in Gujarati cooking as that is what my mother taught me with.  I use a lot less salt than mother.  I think this is because I’m more mindful of the health impacts nowadays of eating too much.

That’s really it.  Even with these simple spices you’ll be able to create a lovely Gujarati shak. They are the basics I started with and learned to build upon.

The following spices and herbs are also sometimes used in Gujarati cooking. 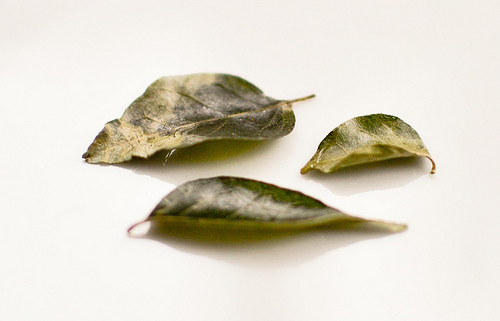 These are from the curry tree which is native to India and give a slightly nutty, citrusy flavour.  You can buy them fresh in most Indian supermarkets nowadays. They don’t keep very long so simply pop them in the freezer and they last for ages. 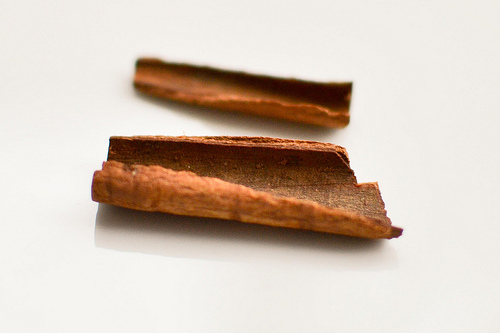 This is such a fragrant spice and this is really what it adds to the recipe.  A slightly sweet, woody flavour.  You can use the powder but I prefer adding the sticks into hot oil to release the flavours and aromas. 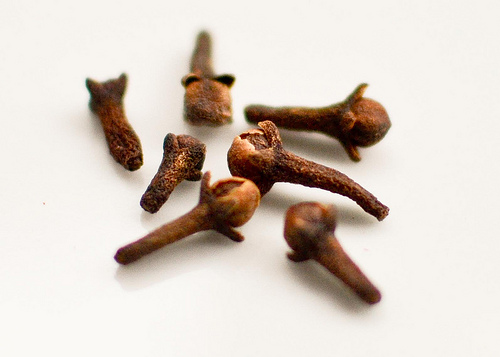 They are the buds of an evergreen tree native to Indonesia and used in their dried form and usually whole.  These are very strong so you’ll only ever need a few in each dish.  They are also used in ayurvedic treatments because they have a warming effect in the body.  My mother used to make hot clove oil when I had earache. It always worked.

I hope that’s given you a good intro to the basic spices I’ll be using on this site.  If you have any trouble finding them, please leave me a comment below and I’ll do my best to help.