Have I ever told you the story of how I became an allotment owner?  It was about 3 years ago that I was thinking about a birthday present for my husband. It was the summer before his next birthday and there was a programme on the BBC fronted by Ainsley Harriot.  He’d been cooking in an allotment that day and there was some wonderful moody, colourful shots of happy allotment owners all having a fun BBQ.  It was all rather idyllic and I wanted a piece of it.

Take a look at the National Allotment Society website

I wasn’t really sure how to start so I turned to Google and typed in ‘allotment’.  The first site that came up was the National Allotment Society’s website. Who knew there was such an organisation? It has all sorts of the right information you want to read before venturing to your local council site to find available plots.

So I contacted my local council and had a look at the plots near me. I left messages and sent emails. Finally someone called me back with a message to say I was on the waiting list and would find out next February when all the memberships came up for renewal.

I was deflated. I couldn’t rely on that as a birthday gift. What if I didn’t get picked? So I forgot all about to to be honest until this March when I got a call asking if I was still interested and if I’d like to come and have a look at some plots. I jumped in the car straight away.

I saw three plots and settled on this one because I knew the girls would love the little caravan.  How the previous owner got it in there I don’t know!  Ironically this was two days before my husbands birthday so it ended up being a birthday present after all. 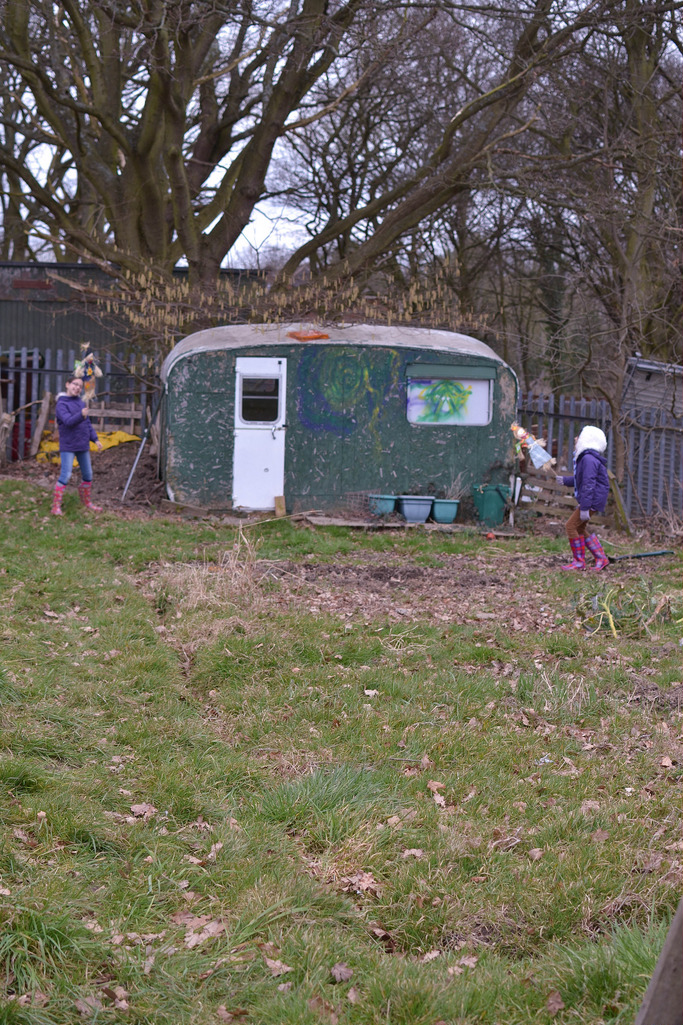 Our plot before it all began

As you can see there was a fair amount of work to do and we didn’t really know where to begin.  We called Granddad who did a soil sample and suggested potatoes, swede and turnips.  All the things we didn’t want to grow! We wanted to grow sweetcorn, quinoa, tea, wasabi, New Zealand yams and other such ‘exotic’ crops.  The good news was he thought the the straggle of twigs and weeds was a raspberry bush. 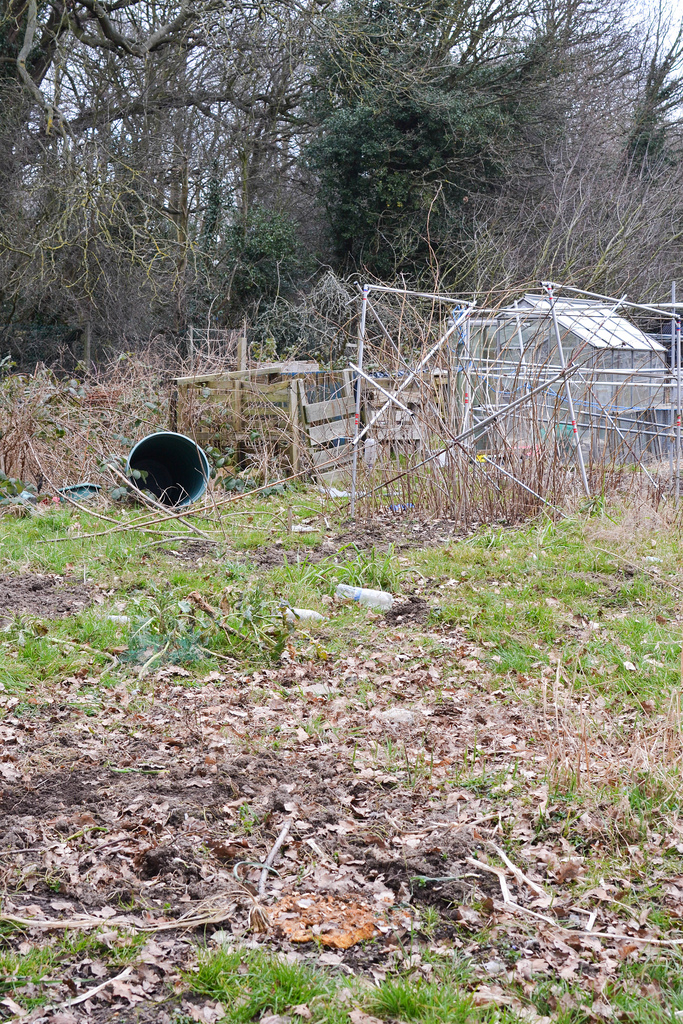 But first it was time to tidy and dig over the ground. This took three weekends. Next we created a plot for each of the girls which would be closely guarded at all times by Mr and Mrs S. Crow. 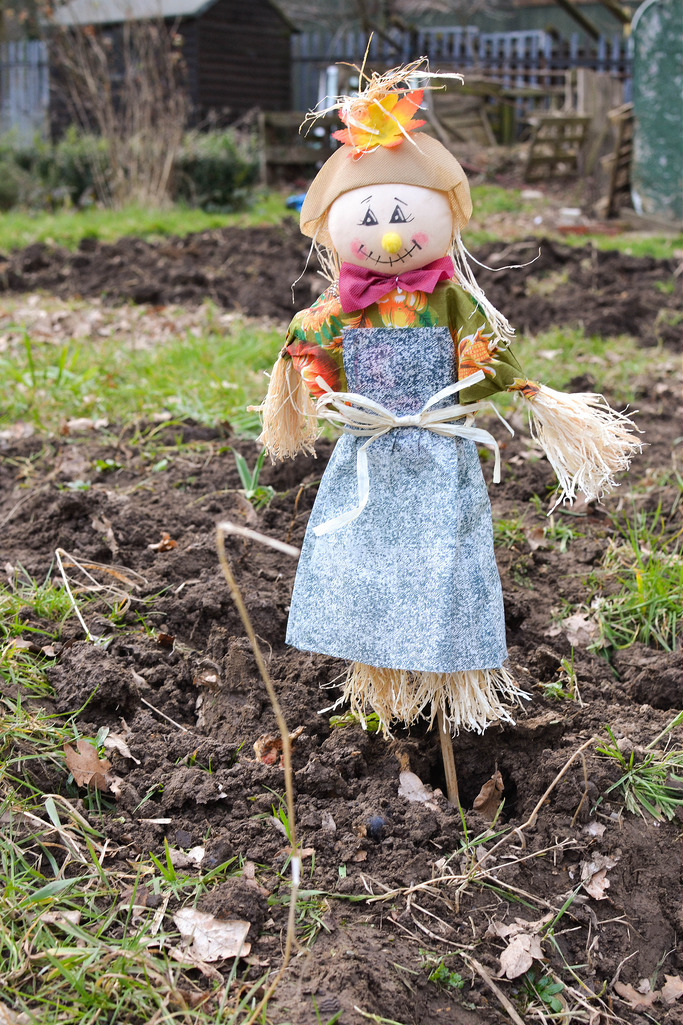 Amy planted carrots and Amber planted nasturtiums.  We planted dwarf beans, broad beans and New Zealand yams.  Granddad gave us strawberry plants which took prominent place. And so this is our plot now.  Rather prettier than 4 months ago don’t you think? 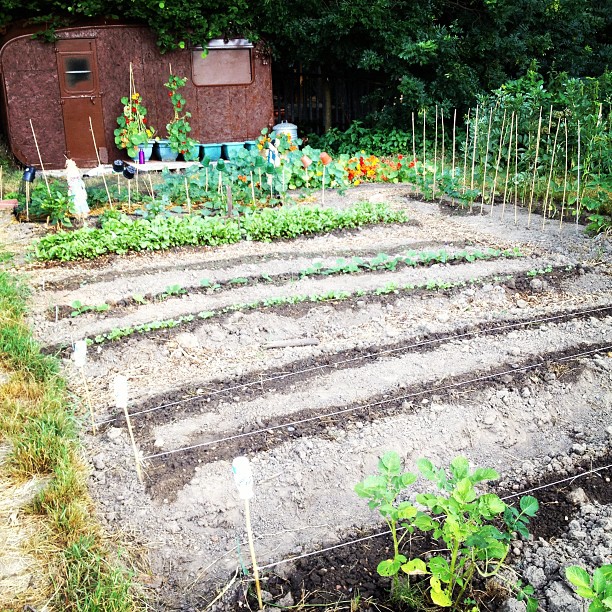 A neat and tidy plot

We have since added beetroot, radish, purple sprouting brocolli, two different types of courgettes and some romanesco.  All our crops have sprouted except the romanesco and quinoa.  Potatoes came up where the quinoa was sown. Odd but at least there’s something to look forward to.

A friendly and helpful community

I love our allotment. It’s a great little community.  We’ve met Alan who has been coming everyday since 1976.  He kindly gave us gooseberries a few weekends ago which I shall write about soon.  We’ve met Erroll who’s given us advice on keeping away the deer and growing sweetcorn.  Mike and Neil are our immediate neighbours and they’ve given us encouragement and pumpkins for the girls. Our other neighbour, Mr Strange Language as my girls call him always gives us coriander as it’s the only success he’s had of late. Let’s not forget Mr Kholrabi who we’ve been plotting with on how to create an automatic watering system so we don’t have to lug buckets up the hill. And finally Mr Goji Berry Plum wine who gave Amy some lettuces to grow and got us rather drunk on his plum wine!

I look forward to going every day to water and weed and see which shoots have come up.   Recently we’ve even had some crops from the seeds we planted only 3 weeks ago! 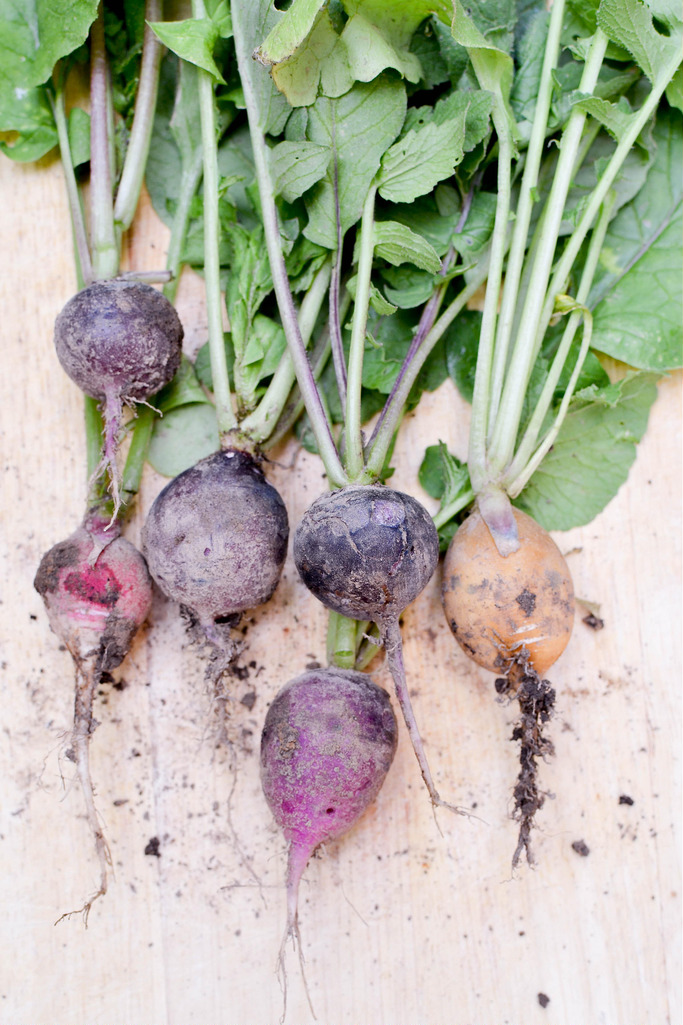 I would thoroughly recommend ‘allotmenting’ as a pastime, a hobby, an obsession. And I couldn’t do it without the help and support I’ve had from you all and Twitter.  I tweet and always get great advice or help to identify the random plant that’s appeared overnight.  So thank you and thank you in advance for the many more questions I’ll have on my allotment journey.

Do you have an allotment? Why did you start? What do you grow? Any advice on what to plant in the autumn and how to see the winter through?