I first went to Boulogne as a teenager with secondary school.  We travelled in a hot and stuffy coach to Dover, then on an ugly ferry into an equally ugly concrete port.  I barely spoke enough English back then let alone French but I remember vividly asking an elderly lady for directions, understanding them and then giggling hysterically when she then understood ME!  It was enough to catapult the rain, the concrete and the noisy seagulls into obscurity and the start of my thirst for languages.

Despite the memory,  Boulogne has never been on my list of places to visit again.  However last year en route home from Paris, we stopped there for a late lunch and were so pleasantly surprised we decided it was worth planning  trip back and staying a bit longer this time.  The recent Easter weekend was the perfect time and here are my highlights of the city.

Take a guided tour of the city

Booking a guided tour is the best way to see key sights if you’re short on time.  We booked a guide, Marie, via the Boulogne Tourist Office.  She spoke excellent English and was very patient with questions from my girls.  We started at Quai Gambetta which is home to little wooden trading huts selling fresh fish every day.  Marie explained that the huts are run by fishermen’s wives and are open on different days depending on where their husbands fish. 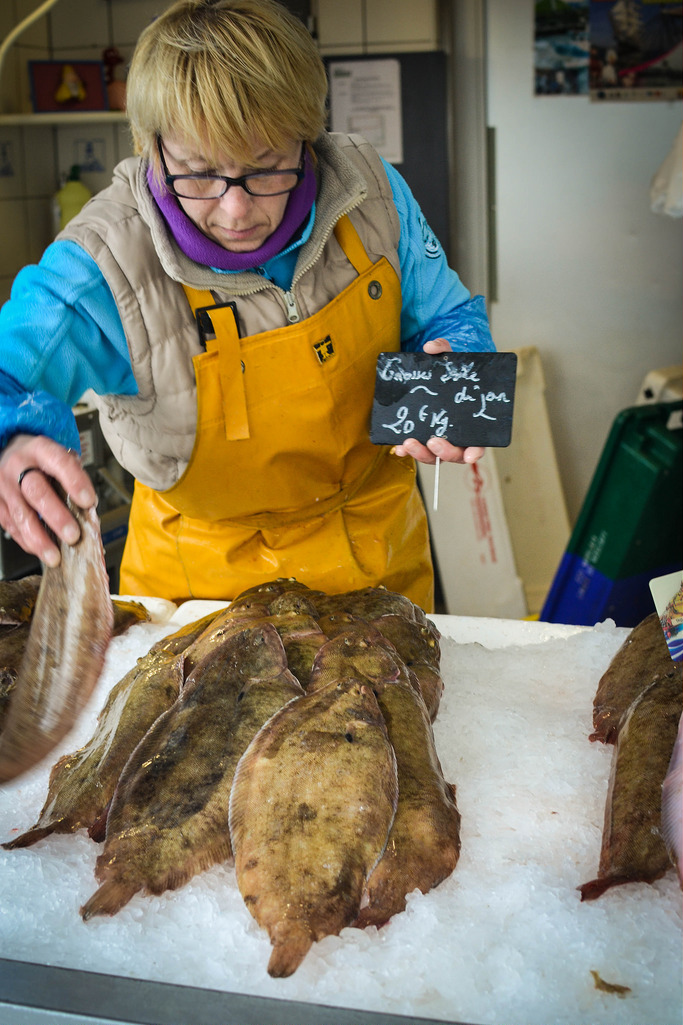 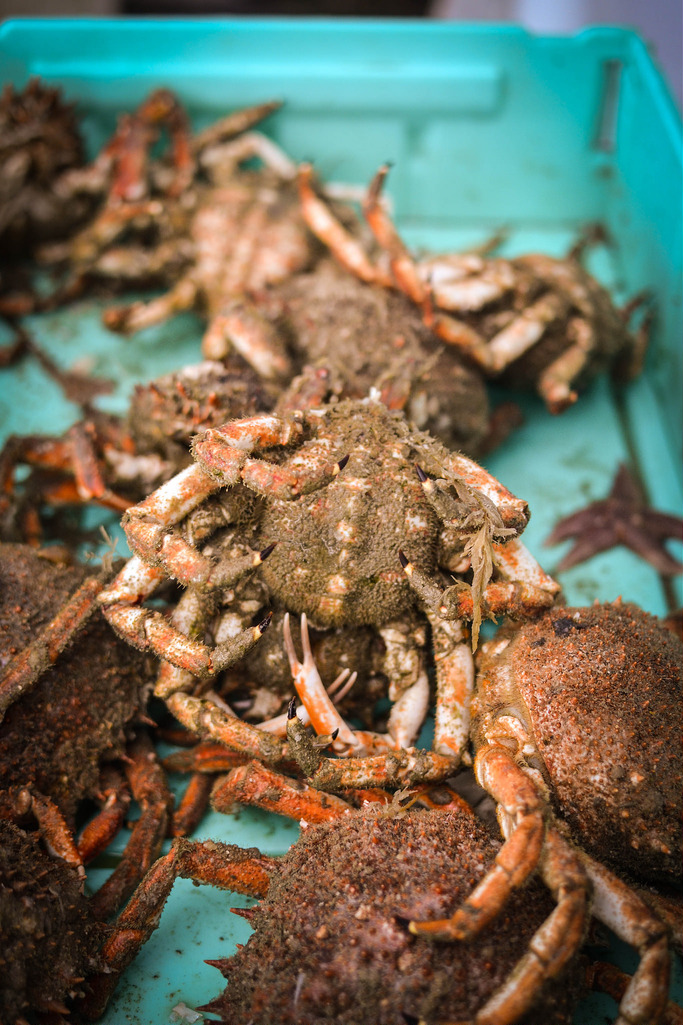 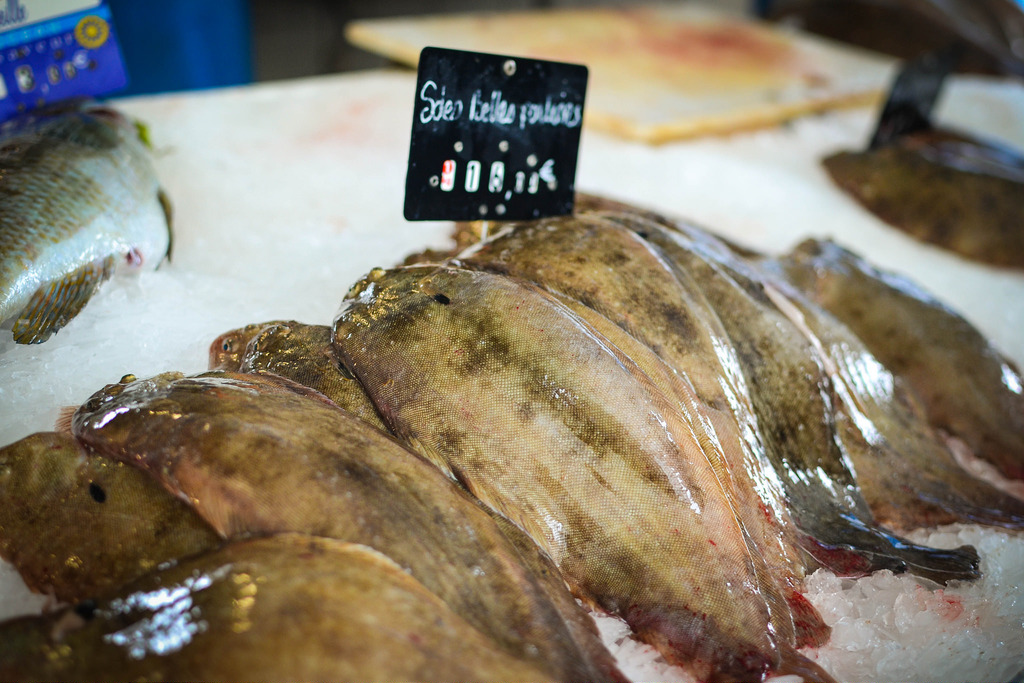 Fish straight off the boat at Quai Gambetta, Boulogne

The tour continued into the old town visiting Notre Dame Cathedral.  The 101m tall landmark is dedicated to ‘Notre Dame’ or ‘Our Lady’.  Legend says that in the 7th century an unmanned ship sailed into the port of Boulogne with just a statue of the Virgin Mary.  The statue was taken to the church that stood where the cathedral is now and soon became a pilgrimage destination for many miracle seekers of the time.  That church was burned down and rebuilt many times over the centuries.  It’s truly magnificent inside and out and has so many points of architectural interest inspired by St Paul’s in London as well as St Peter’s in Rome.  We particularly loved the magic windows you can see from the outside but not the inside. 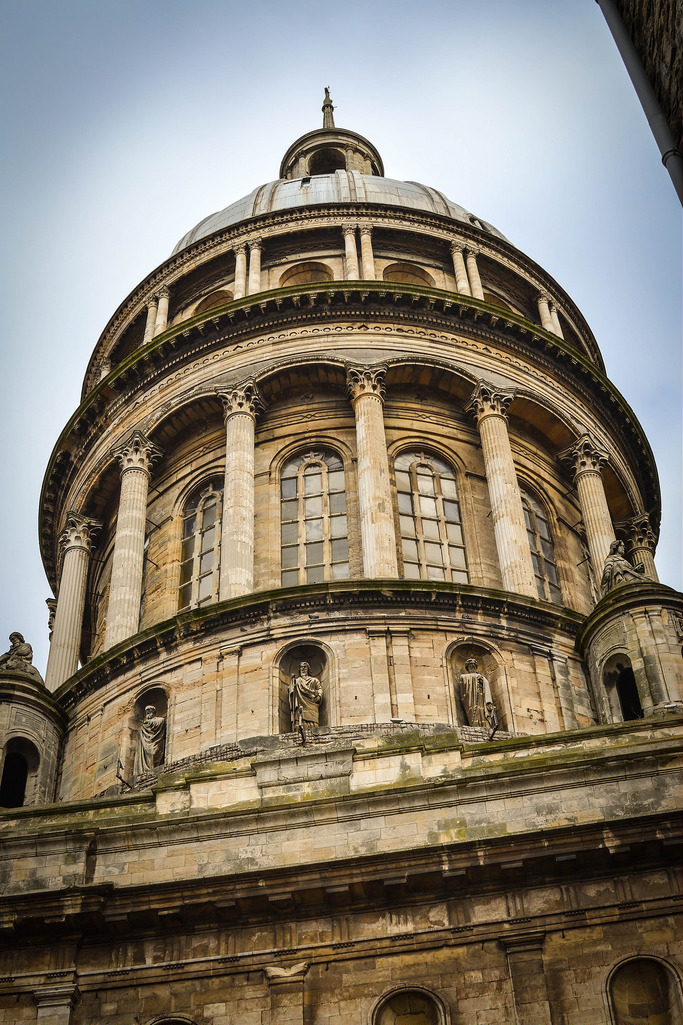 Following this we visited Chateau De Boulogne-Sur-Mer.  It’s a proper old fashioned 13th century castle with a moat.  It’s served many purposes over the years including housing soldiers.  It’s now however mainly a museum with some gorgeous examples of oceanic art.

Our last piece of history was to visit the town hall which houses the Beffroi de Boulogne-Sue-Mer or the Belfry.  It’s the oldest structure in the town and was first constructed as a dungeon but later became the only place in town to look out for enemy boats.  At the bottom of the Belfry you’ll see a wonderful stained glass window of the medieval knight Godefroy de Bouillon who was one of the leaders of the first Crusade. 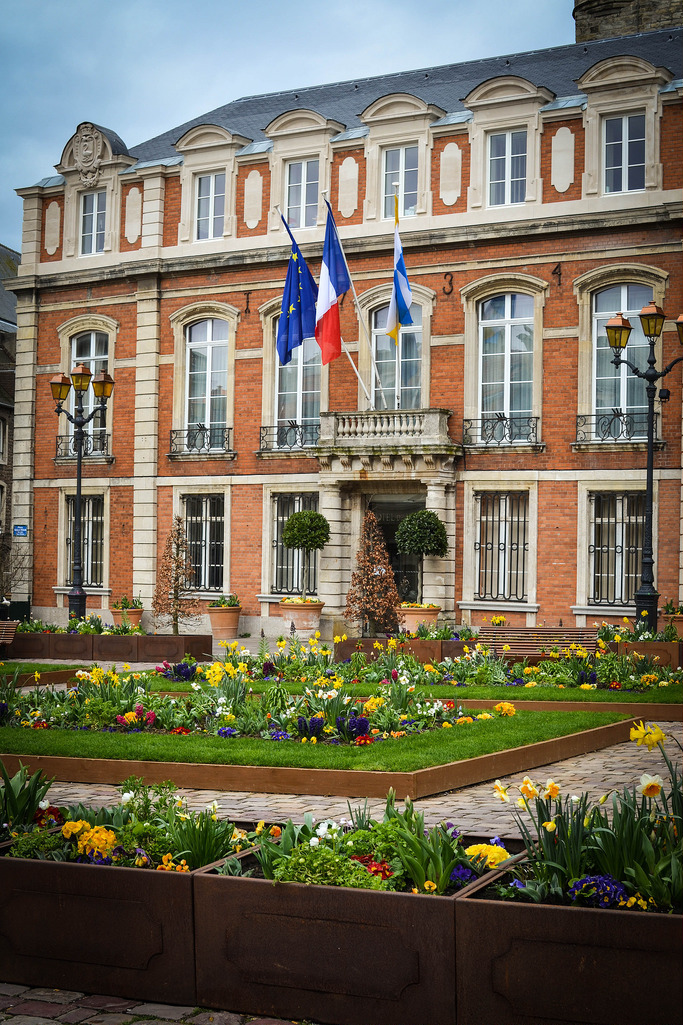 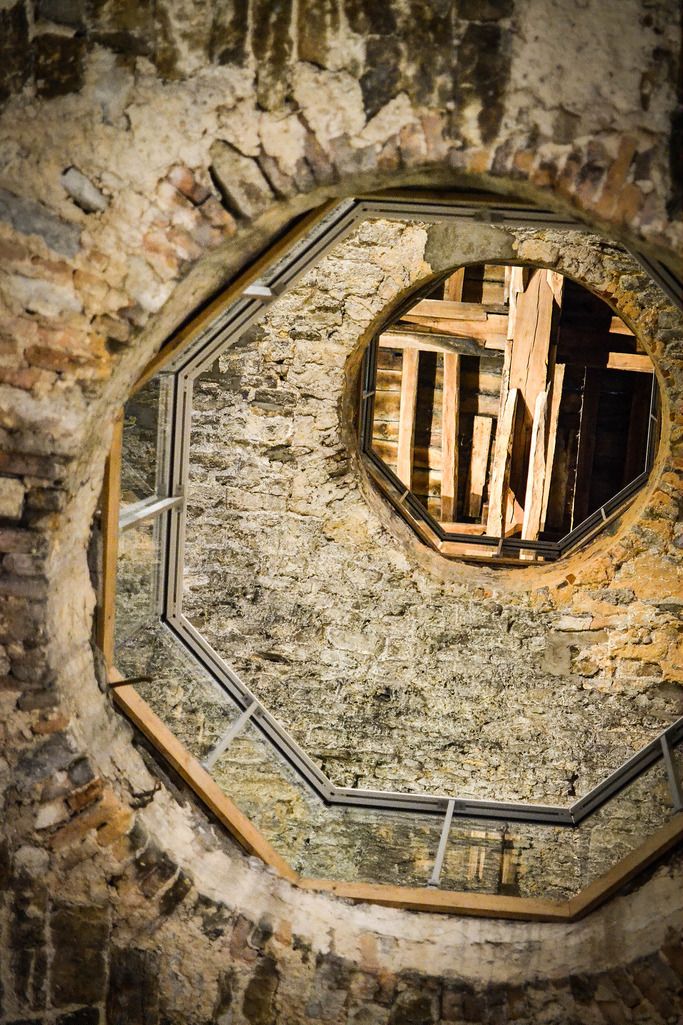 Looking up the Belfry, Boulogne 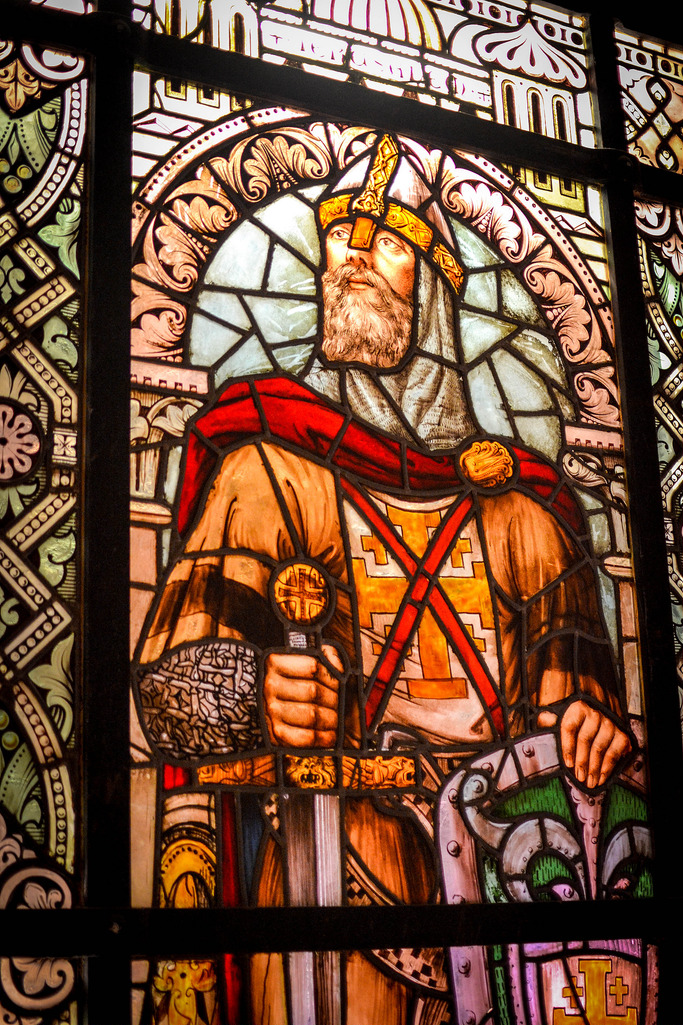 Just outside the Belfry there are also commemorative medals to the city of Boulogne for the part it has played in the first and second world wars. 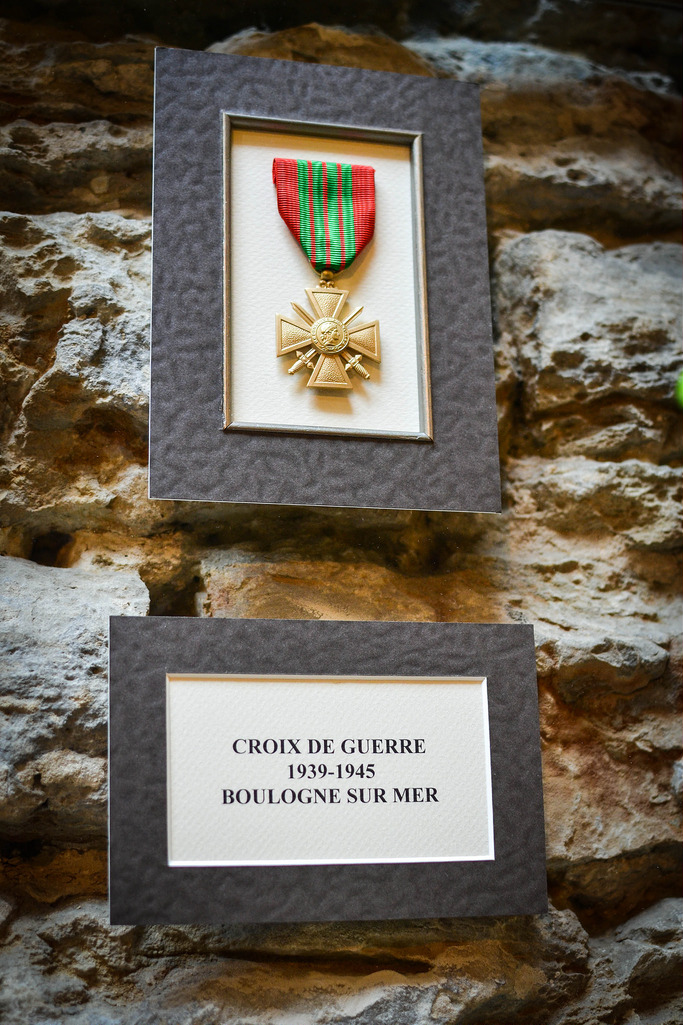 Our tour ended at Nausicaa National Sea Centre.  It was built in 1991 after a decade of preparation and planning from oceanographers and experts across the globe.  It’s objectives are clear from the exhibits inside – to raise awareness of the value of the oceans and encourage responsible behaviour so they can be enjoyed by future generations.  There is also a clear focus on research to preserve marine life and learn about how climate change is impacting plant and animal life in the sea. The whole site is in English and French except for a few videos and talks.  This makes it a must visit with children and you should allow a whole day to get the best from each of the different zones.  Our favourite was the lagoon area as we were lucky enough to see the baby Aldabra tortoises. 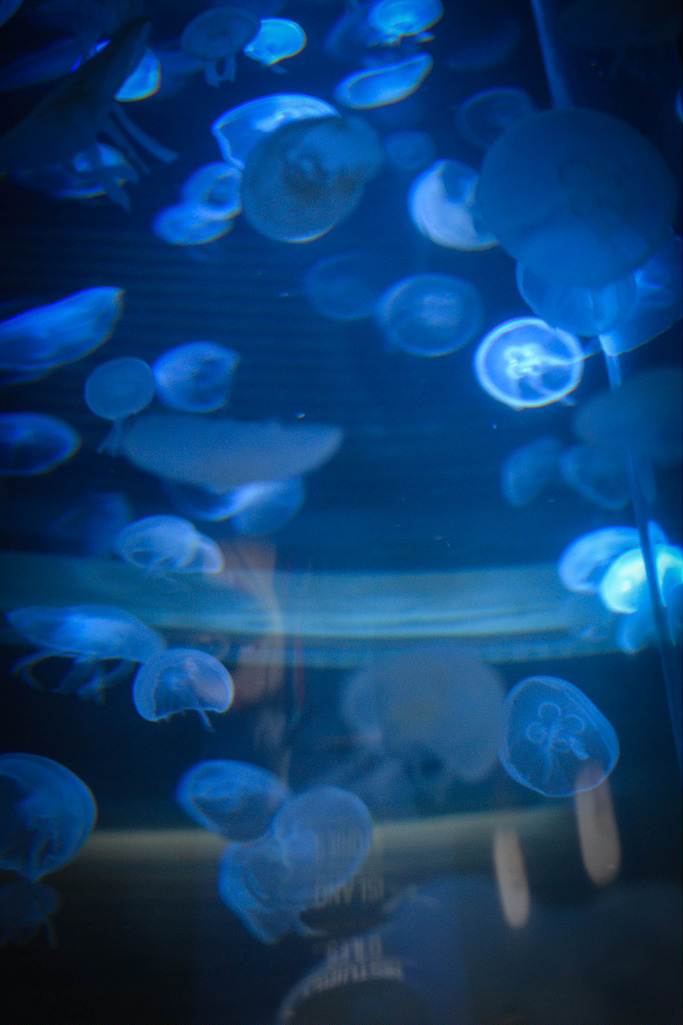 Jellyfish at Nausicaa, Boulogne – beautiful but becoming a pest with climate change and warmer waters 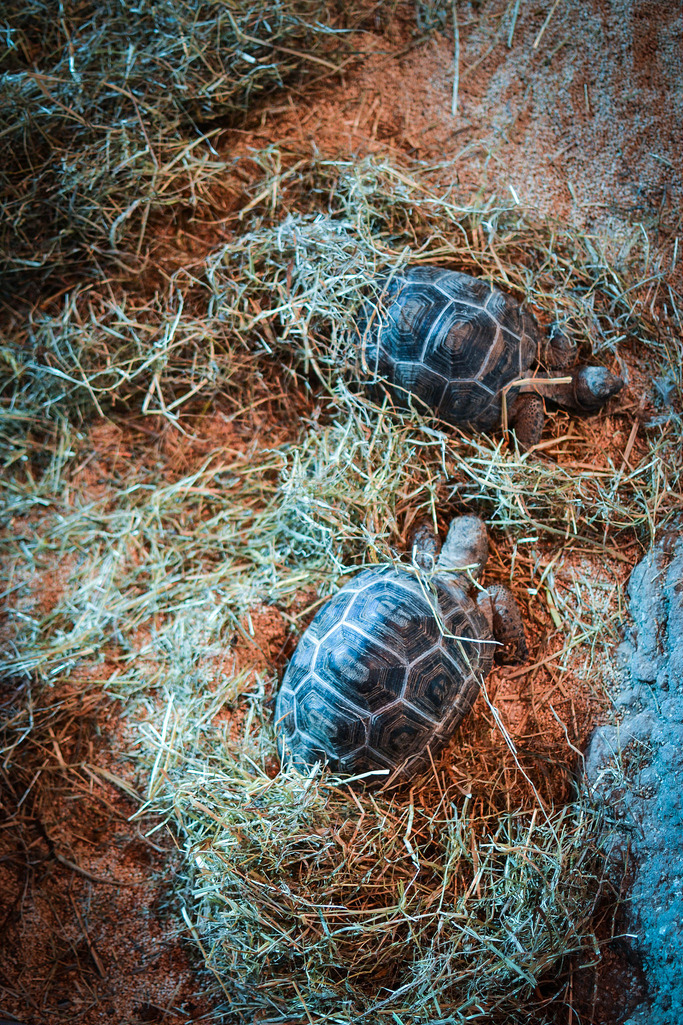 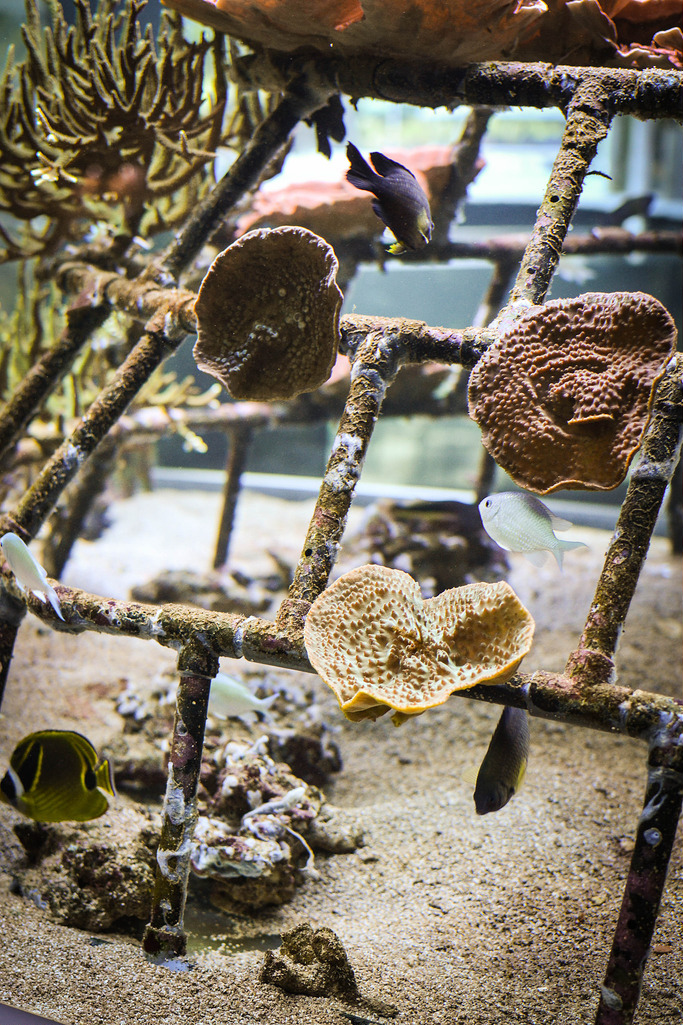 Nausicaa’s aquariums are home to over 36,000 fish and sea creatures

There is a brand new exhibit which launched while we were in Boulogne.   It’s called Ocean and Climate – It’s Getting Hot In Here! and shows how advanced museums have become in engaging their audiences.  There are so many interactive components that bring the messages of the exhibit to life as well as a 4D film.  We received a personal tour from Nausicaa’s General Manager Phillipe Valette which I must admit really made me stop and think.  Properly think.  About all of the different impacts my life is having on the ocean and life within it and life that depends on it.  This is exactly what the exhibit is designed to do and has been launched ahead of the 21st Climate Conference in December which France will host.  What I really enjoyed was the clever way the exhibit holds the attention of children and adults.  We all came away with different thoughts which led to a lively discussion over dinner about sea stations, sharks and icebergs!

The seafood is outstanding in Boulogne.  You can see from the freshness of the fish at Quai Gambetta above that chefs in town take quality very seriously.  There is so much choice in terms of eateries but a good place to start is the pedestrianised Rue de Lille where we found Le Swan and L’Ilot Vert or Place Dalton where we discovered a wonderful wine bar/bistro called Le Comptoir. As a huge fan of French patisserie I was a little disappointed that there weren’t little boutiques on every corner as there are in Paris but our daily visit to Benoit Leger did not disappoint. 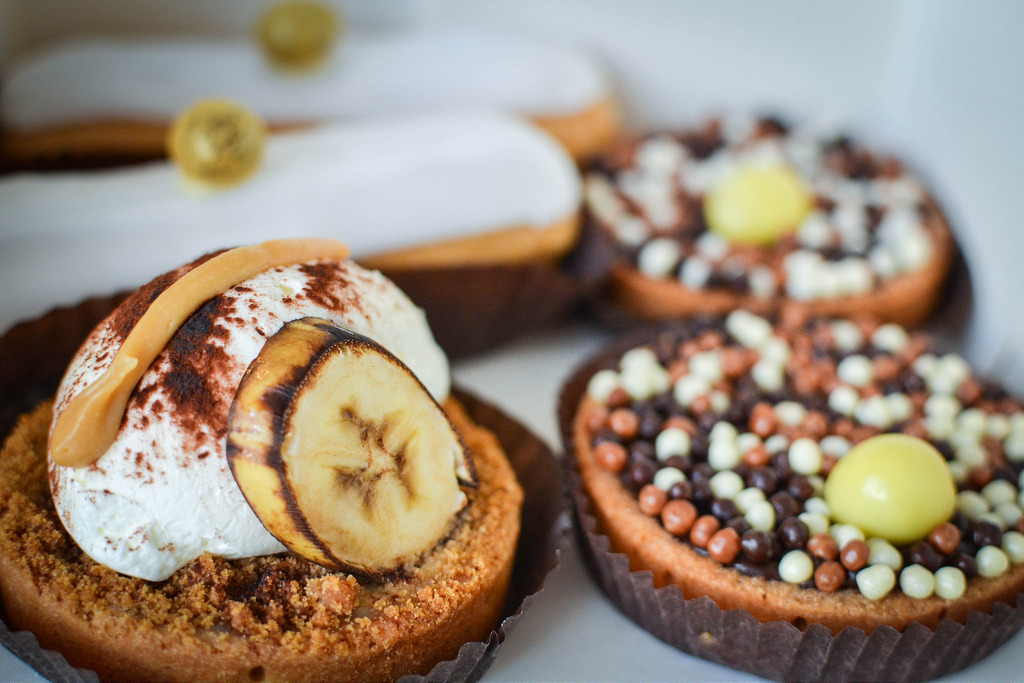 I do hope that like us you’ll give Boulogne a (second) chance.  It really is worth some time and is a great base for the Opal Coast which I’ll write more about soon.

Thank you to Nausicaa for hosting me and my family at the exhibition and arranging a lovely tour of the city.

What was your first trip away with school? Have you been back since?