It’s a freezing, wet, windy day in North London.  I tried various things to get properly warm this morning and had countless cups of tea but nothing seemed to hit the spot. There was much paperwork to be done but I sought refuge in the kitchen instead of the office. It’s the warmest place in the house.  I have two ovens and they’ve been on the go for the last couple of hours.  Some biscuits for the girls to snack on when they get home and a pasta bake prepped for dinner.

Yes I did say pasta bake.  I was chatting on Twitter earlier this week about these being dull and boring vegetarian options nowadays in restaurants. I want something more adventurous. More interesting.  More creative.  But truth be told, on a day like today when I’m at home I just want some pasta and melted cheese.  The ultimate in comfort food.  Stodgy but tasty and just enough to induce a little snooze.  And they can be adventurous, creative and interesting.  It just depends on the fillings and toppings right? 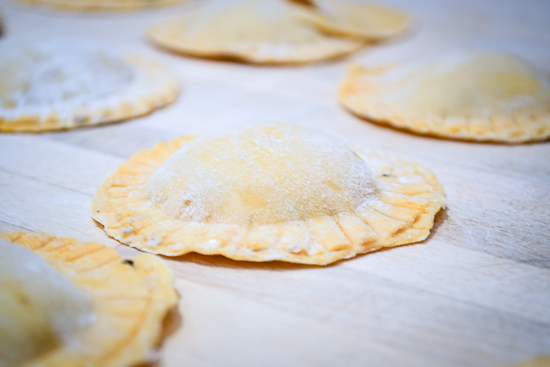 I’ve tried a few recipes for pasta dough but tend to stick with the 100g of flour and one egg ratio.  I rather like mixing it the old fashioned way by hand.  It’s hard going sometimes with the kneading but it has warmed me up today. If you can’t find the 00 grade flour just blitz some strong plain flour in a food processor. It’s a good enough substitute.

Get creative with fillings

My girls generally come up with these based on what’s hiding in the fridge and needs using up.  Usually we have a ricotta based one and then something a bit chunkier.  Here are a few ideas

Today I’ve opted for red peppers, sun dried tomatoes and charred aubergine.  I made the tomatoes in the oven last week and have a nice batch to use up. As the oven was on for cakes I popped the red peppers in to roast off with some rosemary from the garden. The aubergine idea popped into my head because I rather fancied standing and charring it to warm myself up after popping outside to fetch the rosemary! 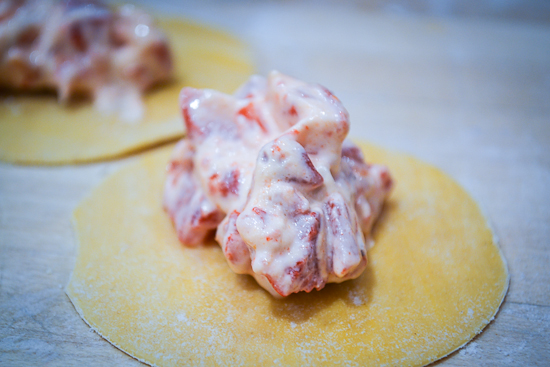 A good dollop of filling

I was given one of those ravioli makers once.  I have never managed to make good ravioli using it.  They are too small.  The sides never stick together and the whole process ends up being a waste of pasta dough.  Instead I use a small wine glass.  You could also use pastry cutters.  You then get lovely circles which hold plenty of filling.

For the pasta dough

What do you do to warm up? What’s your go to ravioli filling?

Previous Post: « Oven Dried Tomatoes – A Taste Of Summer
Next Post: Cake Pops For Mother’s Day Or Any Other Day! »