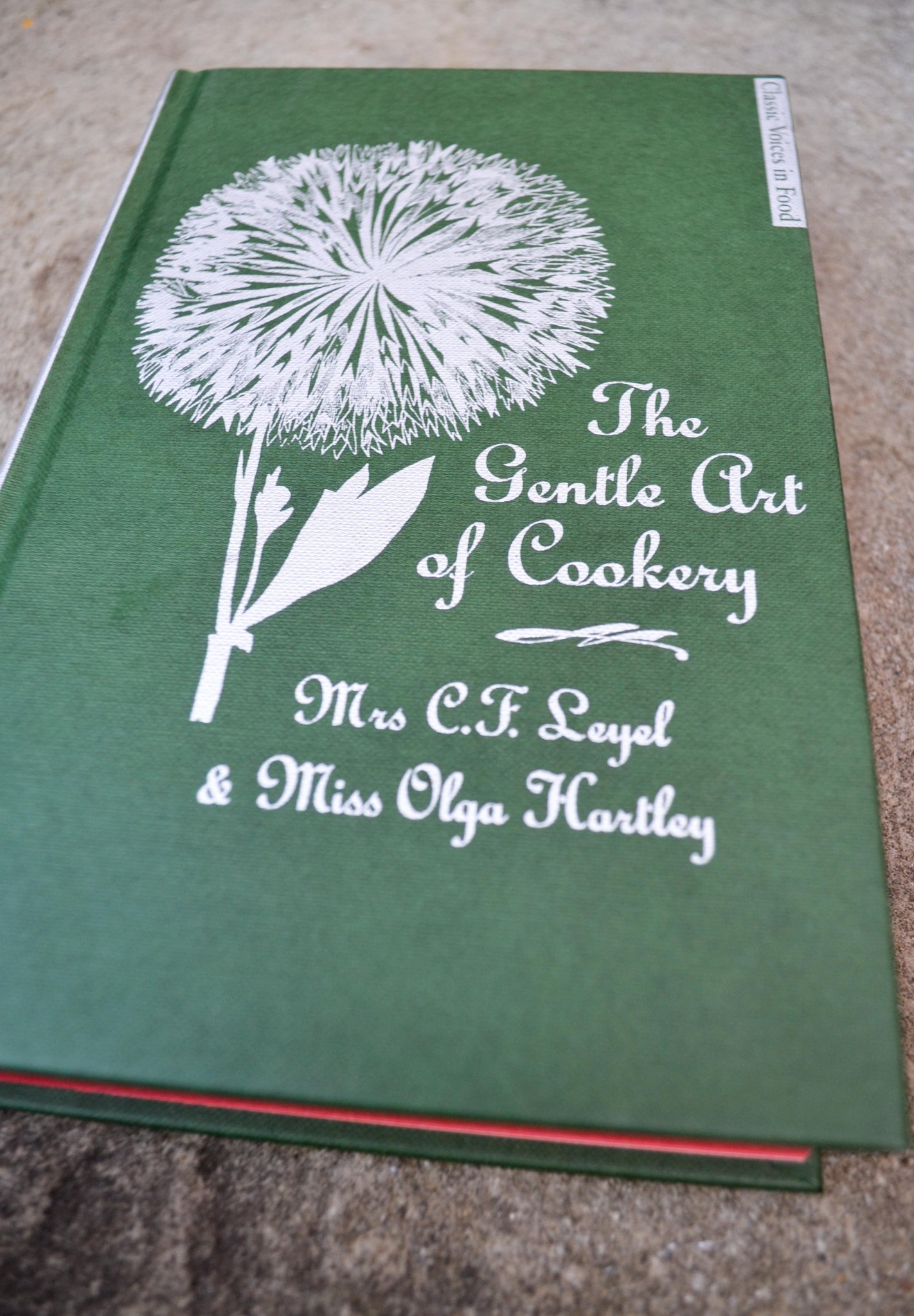 Hilda Leyel was an expert in herbalism and founded the Society of Herbalists which later became the Herb Society in 1927.  She opened a chain of herbalist stores called the Culpeper stores, became a fellow of the Royal Institution as well as an officer of the Academie Francaise.  Olga Hartely was Mrs Leyel’s assistant and helped her to write this book.

This book was first published in 1925 and is a fascinating insight into food of the time.  It is based on menus Mrs Leyel served to friends as well as an excellent section at the end called The Alchemist’s Cupboard which suggests ingredients to have in every kitchen store cupboard.  There are recipes from across the UK, such as Daisy Wine from Yorkshire, as well as simple ones from Europe such as Keesel from Russia – a thick apricot curd-like pudding served with cream.

There is a conversion chart at the beginning of the book which is much needed because some of the recipes use measures I had never heard of such as ‘a peck’, and ‘a gill’.  The former being equal to 9 litres and the latter 150ml.  It also outlines oven temperatures based on a conventional oven as all the recipes in the book use Cool, Low, Hot etc.

I love the way this book is chaptered.  It starts with Sauces and a bold statement in the introduction that ‘in England sauces are often badly made, badly mixed or not flavoured at all’.  The range of sauces that is then presented must have been quite mind blowing for readers.  One that I did try was Garlic Sauce which is simply olive oil with pounded almonds and garlic.  I had it drizzled over some steamed fish and it was delicious!

The next chapter focuses on vegetables which she describes as ‘the dividing line between good and indifferent cooking’. So true.  Mrs Leyel berates the English ‘method of stewing vegetables in water and then throwing away the water containing the most valuable properties’ and calls this ‘stupid and not economical’.  It would have been great to see her telling Downtown Abbey’s cook this!

There are then whole chapters devoted to fish, meat, poultry and game as you would expect but unusually there are also chapters for cold suppers, sandwiches and savouries because the recipes ‘are arranged in a practical way’ to do as the French do and shop first and then arrange the meals accordingly.

She has separated out chestnuts and mushrooms which I thought rather odd but she outlines that ‘chestnuts are not appreciated in England’ and ‘are worth more consideration’.  I’m glad she did this because there is a gorgeous recipe for Nesselrode Pudding which I tried and fell in love with. She goes on to describe mushrooms as ‘the oysters of the fields’ and suggests using a silver spoon to ensure that they are edible. The spoon will turn black if they are not.

The most intriguing chapter for me covered recipes using flowers such as primroses, violets, marigolds and acacias.  I am still collecting my ‘peck’ of marigolds for the marigold cordial and aiming to grow the half a pound of violets to harvest next spring for the violet marmalade!

As an Indian, I found her chapter entitled Dishes from The Arabian Nights so fascinating. She must have met some amazing dignataries and been such an adventurer to know these dishes so well.  She even has a childhood favourite of mine, ‘Dhal Bhat’, which is quite simply curried lentils with rice.

Finally and as expected there is a chapter on Cakes featuring sponge cakes as well as cheesecakes.

This book is as much a history book as it is a recipe book.  It showcases much of today’s modern gastronomy but illustrates how this stemmed from simple but innovative British cooking of old.

You can also read this review along with other great articles in The Foodie Bugle.