This year already seems full of ‘New Year, New You’ posts and ideas for healthy eating after the excesses of the various festivities this time of year holds.   So I thought I would join the bandwagon and share the one dish which I revert to in times of detox, sickness and cleansing – Kicheree. (Our sounds are difficult to translate into English and I have also seen this written Kichadee or Kicharee). 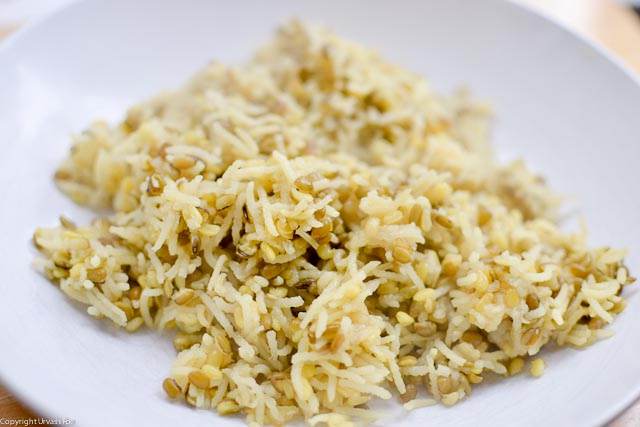 Nothing better to get your system back in order

There are two basic ingredients – split green lentils and rice cooked in equal quantities with water.  You can also use split yellow lentils. 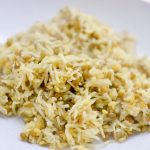 Many Ayurvedic doctors recommend seasonal detoxing and fasting – especially after periods of excess and/or rich food consumption.  It helps the digestive system to rest, let go of our attachments to food and also releases toxins that have accumulated both emotionally and physically.

It’s difficult to physically release toxins at stressful times of year such as Christmas, Diwali and New Year. Our bodies are programmed to store fat during times of stress – hence the feeling ‘fat’ and lethargic.  But during calmer and more peaceful times, or as our daily life and patterns normalise, it’s easier to burn fat and the more we burn, the more toxins we release.  And the more toxins we release, the healthier our immune systems become.  It’s fascinating reading and if you are interested in delving deeper try the work of Candice Pert, especially Molecules of Emotion: The Science Behind Mind-Body Medicine.

Many of my elderly aunts meditate.  I’ve never really been keen on this but having done a little reading I’m tempted.  I found out recently that negative emotions such as anger, fear, sadness, jealousy and so on are lipophilic.  This means they are stored in our fat cells.  Burning fat and releasing toxins lets go of these old patterns of behaviour (which is another reason why exercise also feels so good at this time of year).

How does this all relate to my simple dish of kicheree?

Kicheree is a key part of a detoxing fast.  Fasting in our Gujarati world is not about forgoing all food.  Just simplifying our diets or even eating once a day with some religious fasts.

Kicheree pulls toxins from the body and is healing for the digestive tract.  It’s eaten on it’s own and at the very most with steamed vegetables for those following a very strict fast.  Some add ‘warming’ or ‘burning’ spices such as ginger, clove and cinnamon.  Interestingly because it is so easy to digest kicheree is one of the first foods given to little ones in my family. Once they have passed the baby rice phase and are starting to toddle, we believe their digestion improves a little more with the extended hip movement and exercise.  My mother uses to mush it up with ghee for me and make little mountains for me to pick up.  I have done the same with my girls.

A few other things to think about…

To get my system back to basics, I always start with the simple kicheree which has nothing but a little turmeric and ghee and perhaps a splash of warmed milk. Here are a few other things you can do and eat to support your detoxing fast:

Just a final word. I am not a doctor – ayurvedic or otherwise and so everything I’ve just written is based on what’s worked for me or passed down from my mother and aunts. Please consult your own doctor before you start any fasts to make sure it’s the right path for you and your body.