I had my very first Gin and Tonic at The Lake Palace Hotel which is in Udaipur in Rajasthan and most well known as the location for the James Bond Film Octopussy.  I cannot imagine there are many Indian girls who haven’t dreamed of staying there in one of the regal suites looking out across the lake to the hills and valleys beyond.  It is the most perfect memory and every time I think back to it I can feel the heat of the sun, smell the spices of the Aloo Tikki that was served with my drink and taste the zesty gin.

My husband had been very specific about ordering a Bombay Sapphire and I hadn’t really understood why until I’d tasted cheaper gins.  I have never ordered a cheap G&T again.  It’s usually Bombay Sapphire, though the Ivy do a lovely version with cucumber and Tanqueray and Sipsmith is simply delicious too.

So when I was invited to the Ultimate G&T Experience at The Hoxton Hotel last week, I could not say no.  Sam Carter, Gin Ambassador and Mixologist for Bombay Sapphire welcomed us at the bar with a huge glass of G&T before demonstrating the way to make it perfectly. 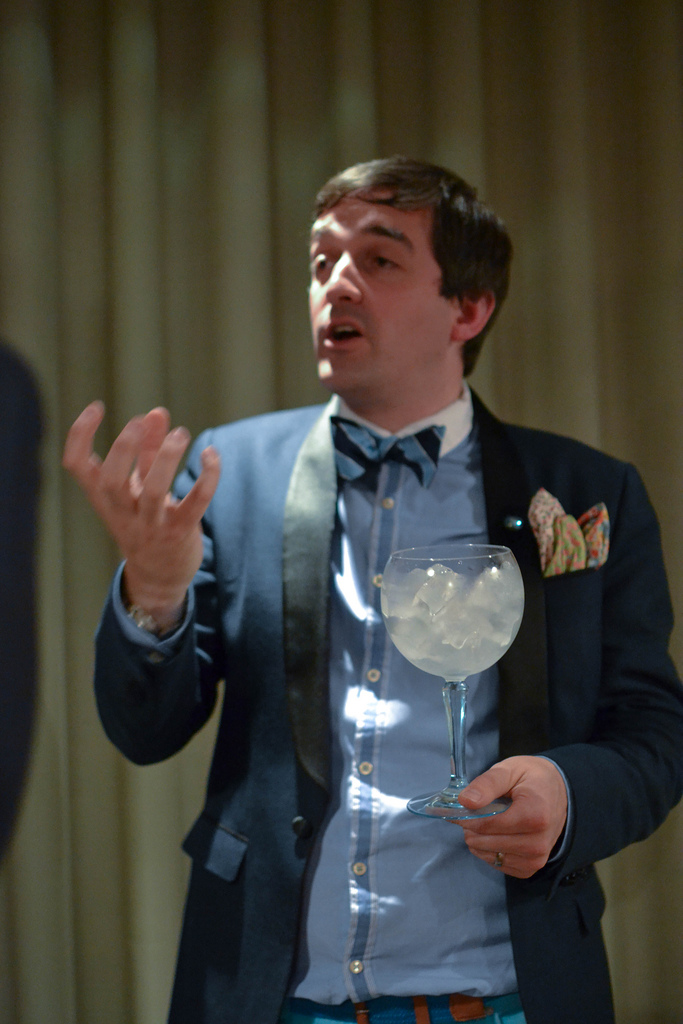 It starts with the right glass

I’ve always had the drink is a tall tumbler glass so I was a bit taken aback at the size of the round globe in front of me.  He explained that 95% of what we taste comes from our sense of smell and so the round glass is far better to drink from due to the surface area that enables the vapours to reach our noses. 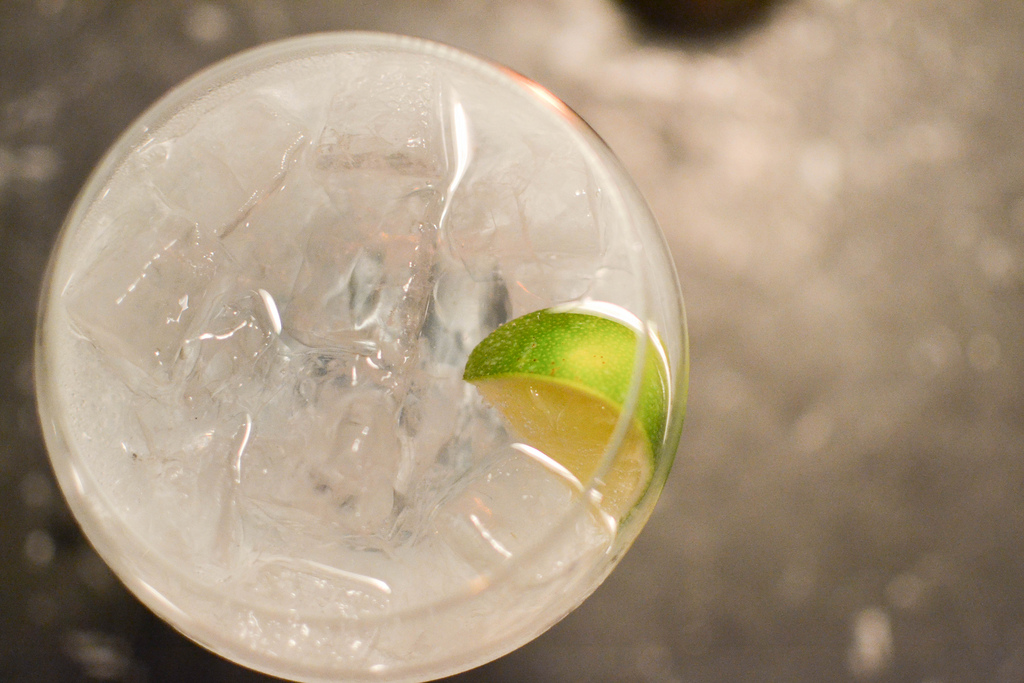 Then you need ice

Now this might seem rather obvious but how many of you drop just a few cubes of ice into the glass thinking that you’ll get a stronger drink? Sam reveres ice.  He explained that ice takes on flavours of the other items in your freezer and so you need to wash it before using or store your G&T ice in a freezer bag.  Then you need to fill the glass with it. Not one, not two or three but a whole glassful to help cool the class ahead of the gin and heighten the flavours in the gin.

The right tonic in the right measure

If you’ve had a G&T from a student union bar, you’ll know what I mean when I say it tastes of sickly, sweet tonic water? Buy good quality tonic because it makes all the difference.  Sam used Fevertree and poured two parts to every single part of gin.

A twist of lime and we’re done

The last but essential touch is the lime which was added by British sailors during the days of the Raj to add some vitamin C to the drink.  Twist the wedge to release the oils into the glass and then pop the wedge into the drink.

The drink really was perfect after a hot and sticky day at work. It went down too quickly as Sam explained each of the ten botanicals used in Bombay Sapphire to give it the unique flavour.

Juniper – all gins have a juniper flavour.  Bombay Sapphire source their juniper from Tuscany from just two farms.  The bushes grow to 40 feet tall by around 4 feet wide and are beaten til the ripe berries fall off.  This is a real art because the bushes also contain green unripe berries which mustn’t be bashed.  The riper berries are then dried to rid them of their water content as it’s just the oil that is extracted for the gin. 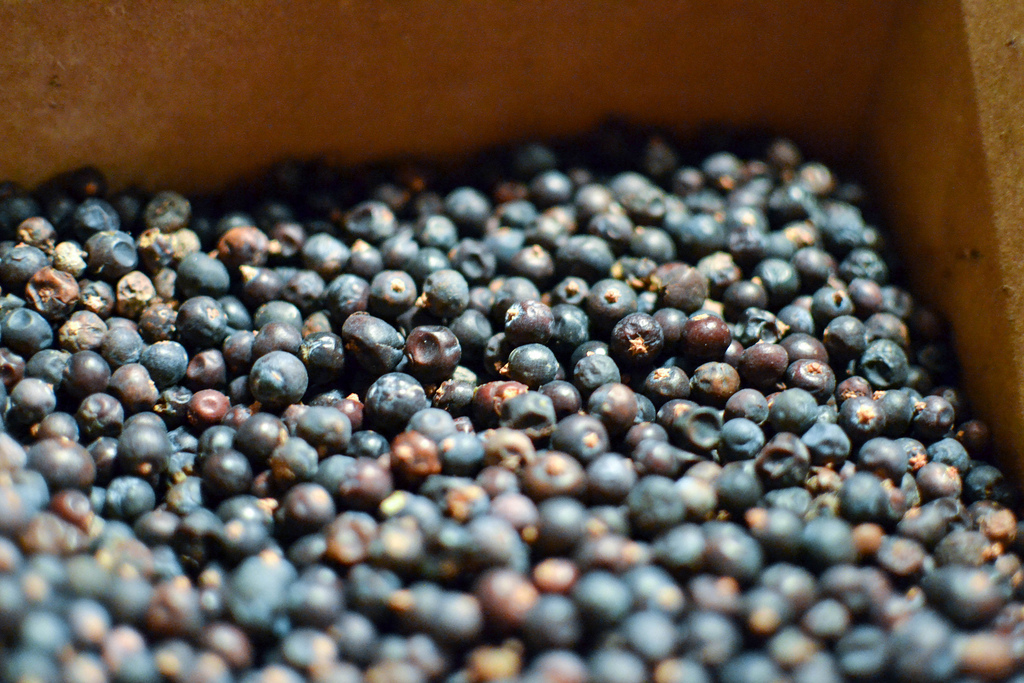 Coriander Seeds – these are sourced from Morocco as they are large and have more essential oils than other smaller varieties.  They are dried in the sun and then for a further nine months in the dark to intensify the flavour.

Lemons – Bombay Sapphire source lemons from Murcia. Sam explained that they are the size of footballs. The lemons are handpicked and peeled and then the peels in their long strands are left to hang from washing lines with a criss cross on the top to encourage air flow.  Again the water evaporates during this drying process but all the essential oils are retained.

Orris Root – I had not heard of this botanical. It is the root of the Iris flower and grows on banked slopes in Florence over four years.  The rizome – or root – is snapped off, hand peeled and then left t dry on metal racks in the sun.  It shrinks and then can be ground to a powder. 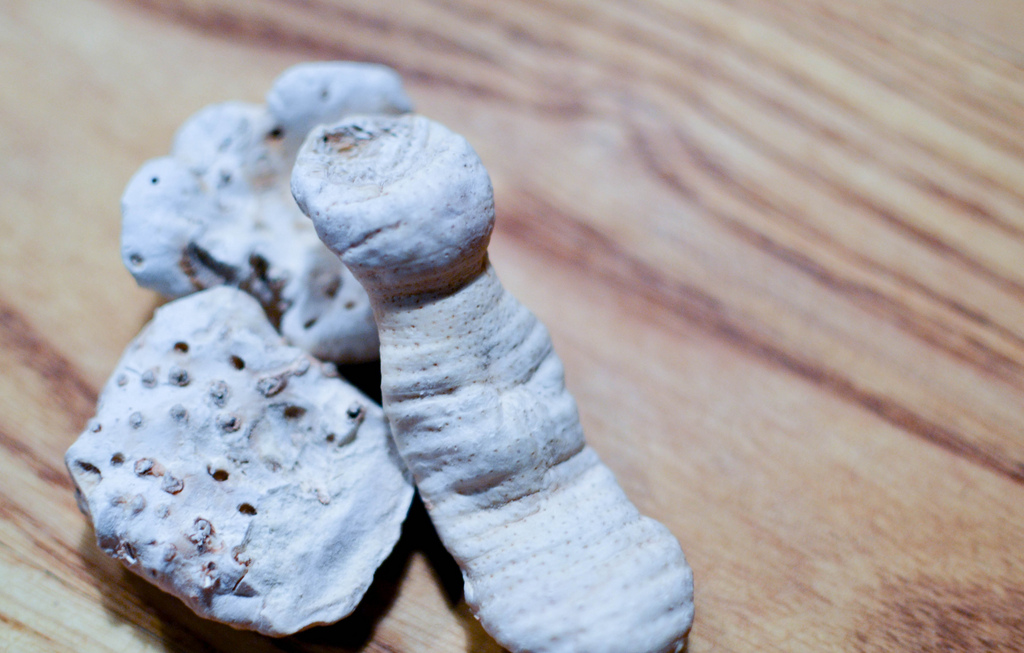 Angelica Root – this gives an earthy flavour to the gin and is sourced from Dresden in Germany.

Cassia Bark – I found this one rather amazing.  The bark of the cassia tree is cut with a machete only every two years.  It has to be the right amount shaved off the tree so more continues to grow. There are strict rules around which trees need to be used to make sure there is no over harvest.

Bitter Almonds from Spain and hand picked and ripped open for the nut to grind it to a powder.  In this way the protein is not stripped away and so there is no impact on those with nut allergies!

Liquorice Root has been grown in China for 2000 years. Only the roots are harvested for the gin.  They get sweeter as they are mulched down and then they are dried and ground to a powder to give the earthy anise flavour.

Cubeb Berries – another botanical I had not heard of before.  These come from Java and Indonesia and are sometimes called Tail Pepper.  Unlike other peppercorns, they have a floral flavour which has a little heat.  This is called an echo flavour as it stays on the tongue for a while. 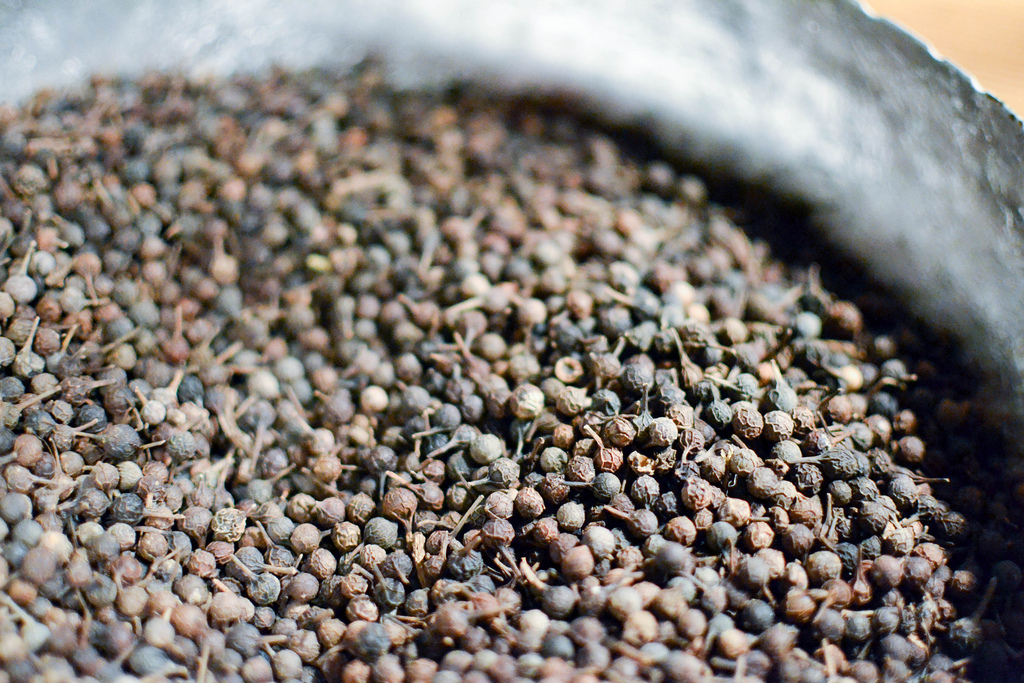 Grains of Paradise are related to the ginger plant and in Ghana where they are harvested they are valued more highly than gold.  The name comes from tales of Adam and Eve.  They were said to be picked in Eden and floated down the river to Paradise. They too linger on the tongue tasting peppery and floral at the same time.

It was a very thorough tour to taste and smell the wonderful ingredients that go into making this gin.  I even got to make my own little fusion using some of the infused gins Sam had made.  Thinking back to my first G&T, I used the Indian flavours of Lime, Ginger and Chilli. 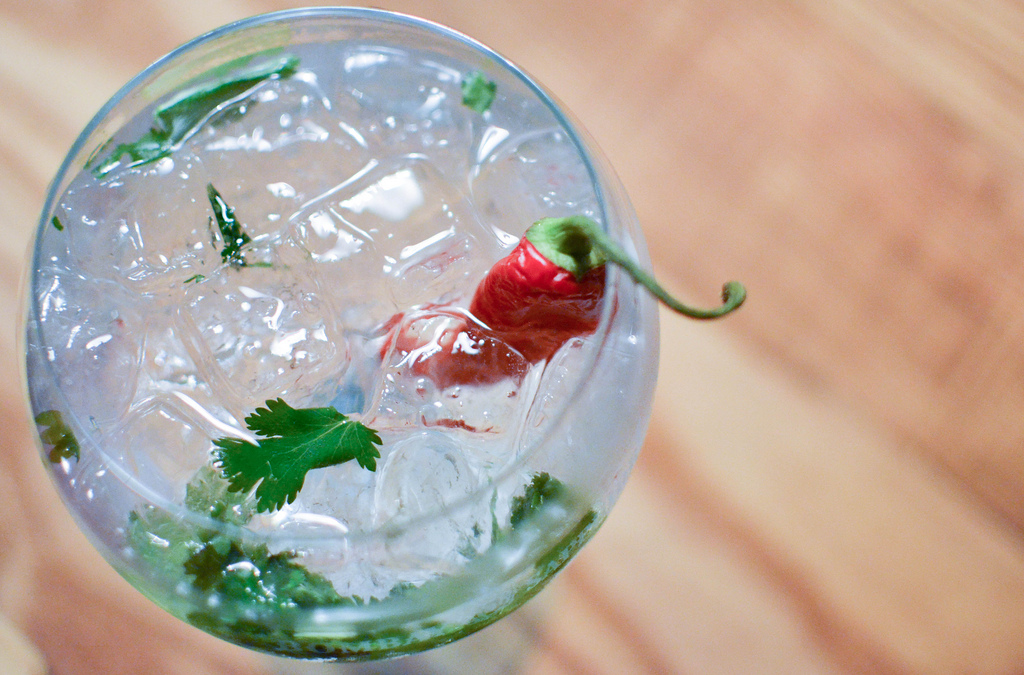 My G&T with Chilli, Kaffir Lime and Ginger

Cheers! Where was your first G&T? Do you make any variations to the classic recipe?