Once upon a time I reviewed a book called Sweet Paris by Michael Paul.  At the back there is a very comprehensive address list of patisseries, cookware shops and pastry postcodes.  It has been on my wish list to wander through Paris and discover these well known and hidden gems alike.

It started with a map

Last weekend I had the opportunity to do just that.  It started with a map.  I plotted patisseries, tearooms and markets and each of the markers held the metro station for reference and any specialities of each place. 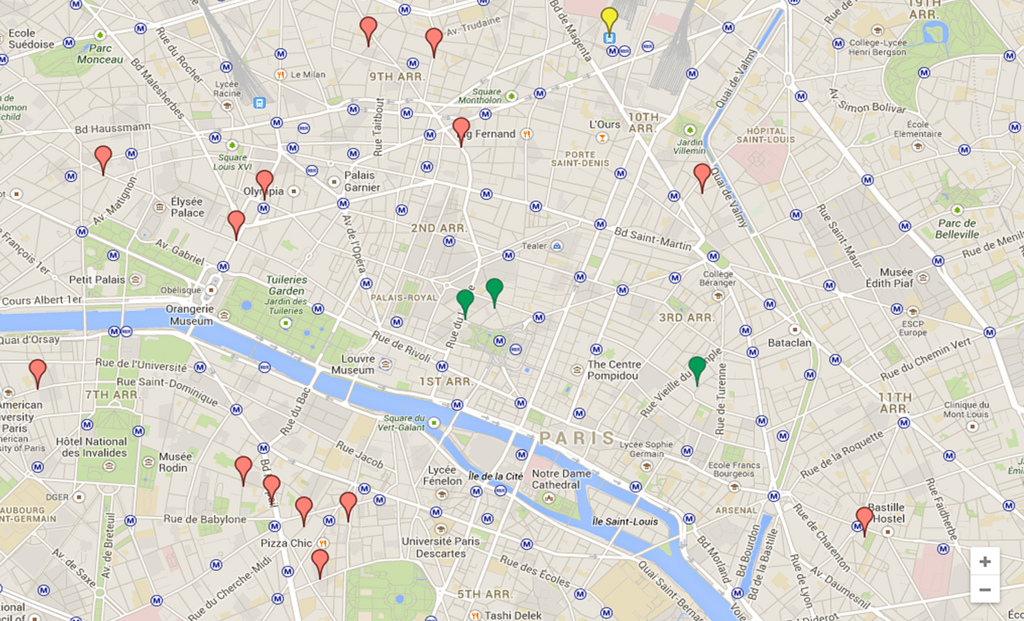 In reality it was an organised form of wandering

The map was helpful to pin point target district areas but in reality I ended up wandering albeit it in an organised way.  It was very difficult to get distracted because every street held treasures. 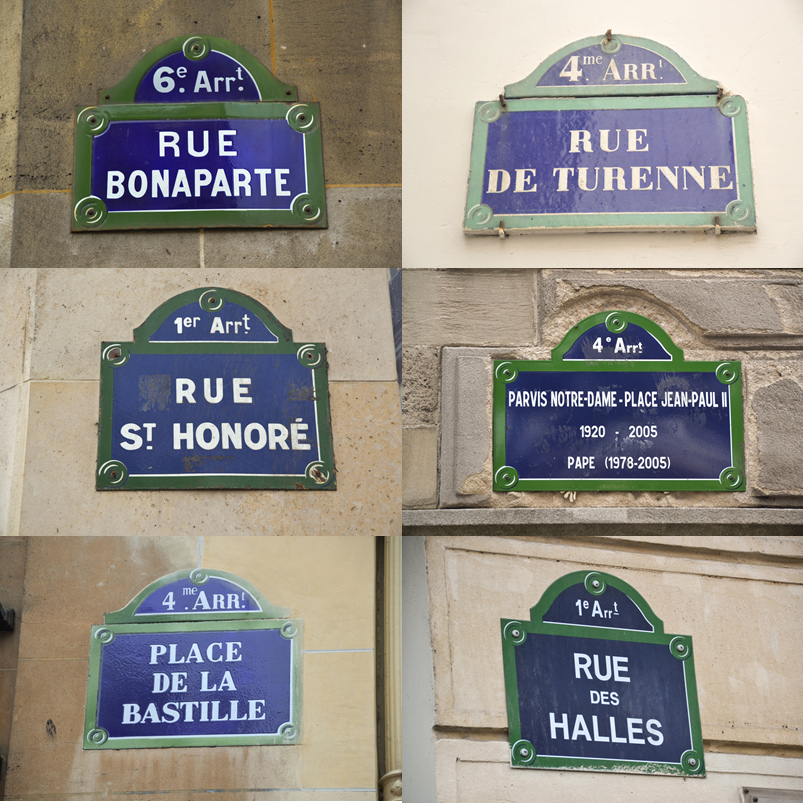 Every street is a treasure trove

Rue de Martyrs was my favourite of the trip.  It is a foodie heaven of independent shops, groceries and cafes.  The patisserie to visit here is Sebastien Gaudard.  A pristine shop in white with white glazed patisserie to match.  The ladies behind the counter were adorably snooty.  I admired the precision with which they displayed the bakes and even the way they steered away from me – as if I would contaminate the beautifully crafted mouthfuls. 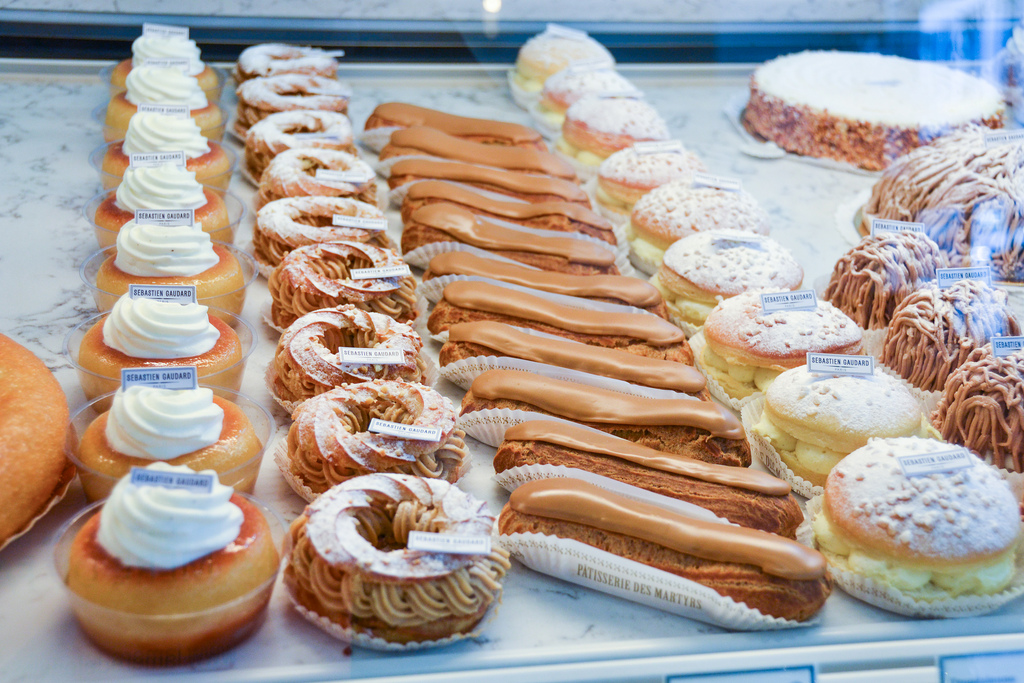 This was on my list because I’ve had the book, Breakfast, Lunch, Tea for years.  It was much less of a patisserie but the loaf cakes did look very good albeit not classic French. 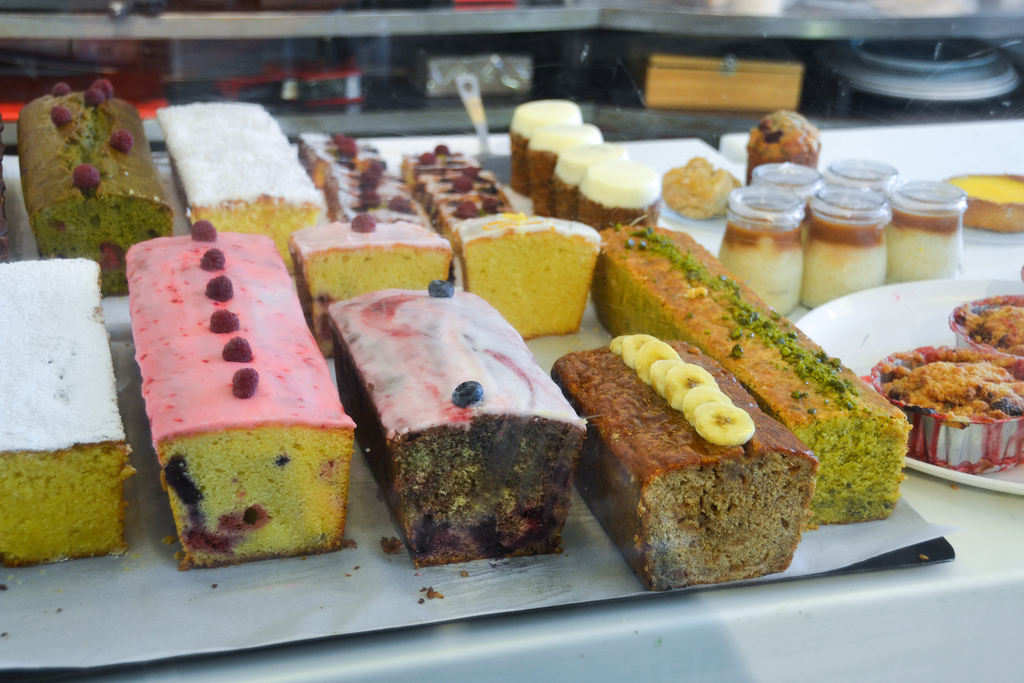 Popelini is on the same road as the two above and specialises in choux buns with a range of fillings.  I tried the lemon which was just the right mix of choux and creme patissiere in a mouthful.  And I took a nice big mouthful! There were also vanilla, salted caramel, pistachio, rose and a changing daily special filled with whipped cream and creme patissiere. 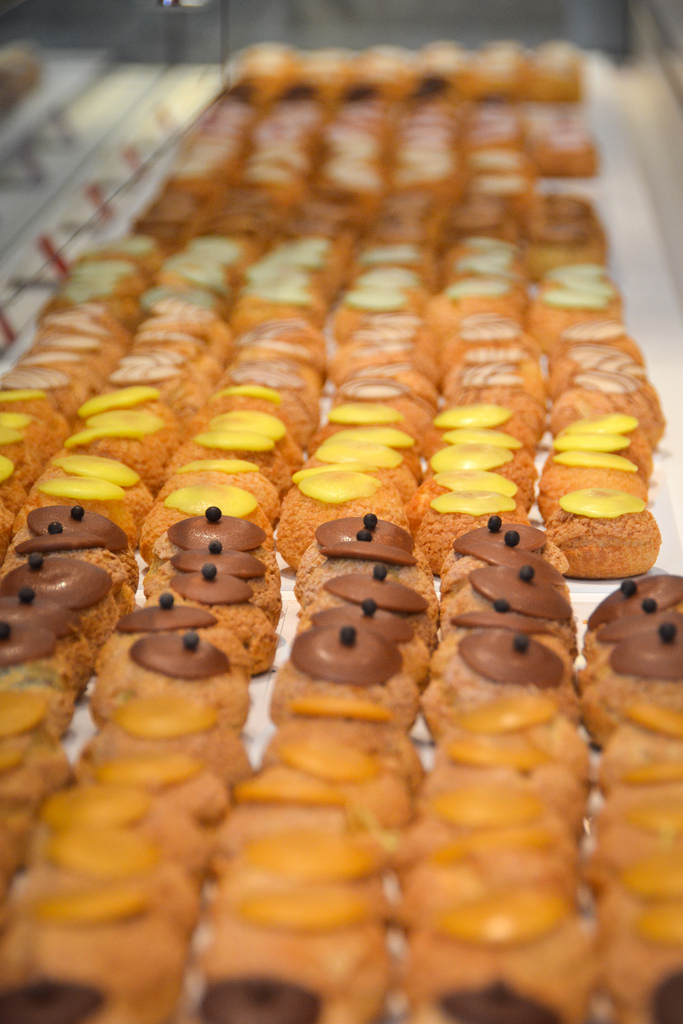 Lines of choux buns at Popelini 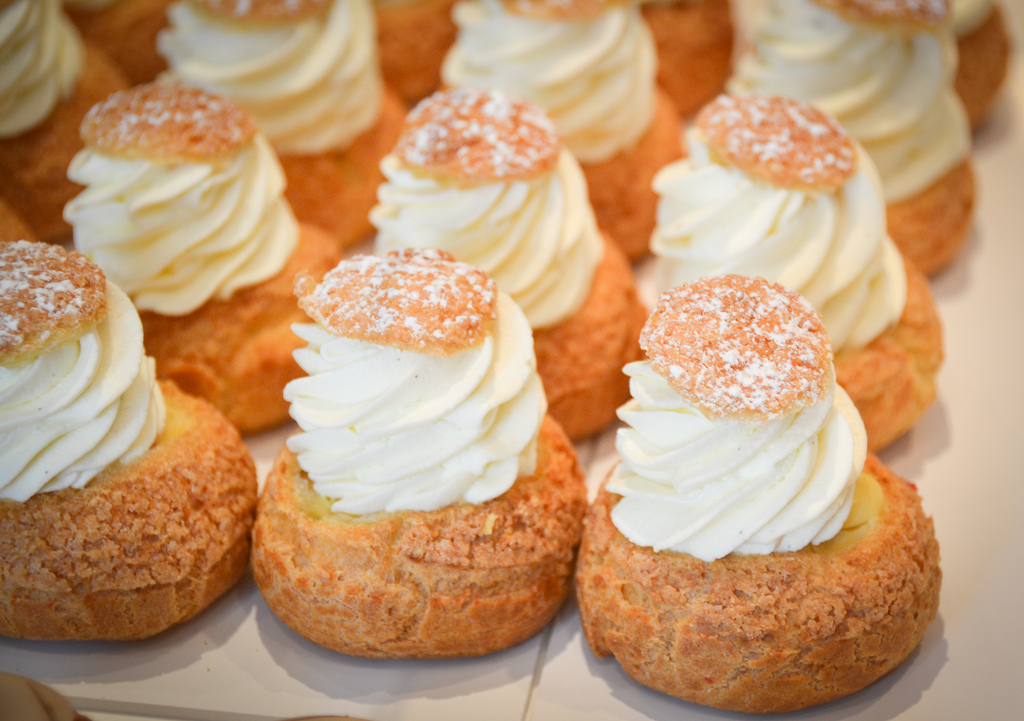 The daily special at Popelini. This was one orange blossom

La Durée macarons were my first.  A friend from Geneva brought them as a gift and I have been hooked ever since.  It was rather amazing to see the Salon de Thé with the trompe d’œil ceiling.  The flavour of the day was Pink Peppercorn which was utterly fabulous. 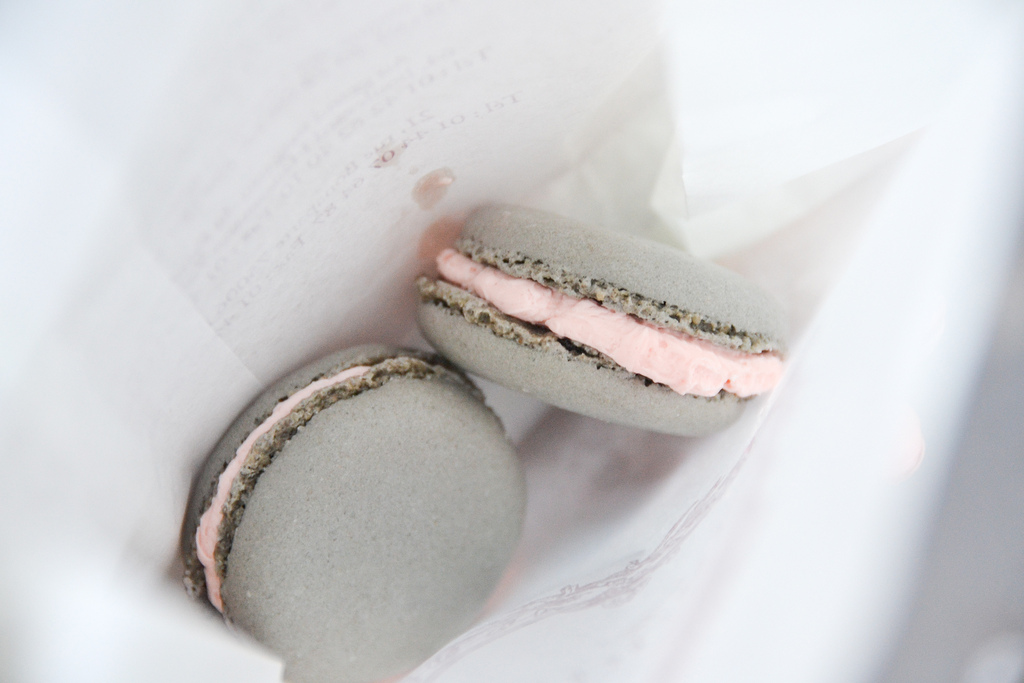 This is home to the Opera Cake so I was keen to hunt this one down.  I was disappointed.  The range looked fabulous but tastes were dry, staff were unhelpful and there was a smell of savoury in the shop which masked my enjoyment of the patisserie counter.  The only Opera cakes for sale were the large square variety which I was not allowed to photograph. 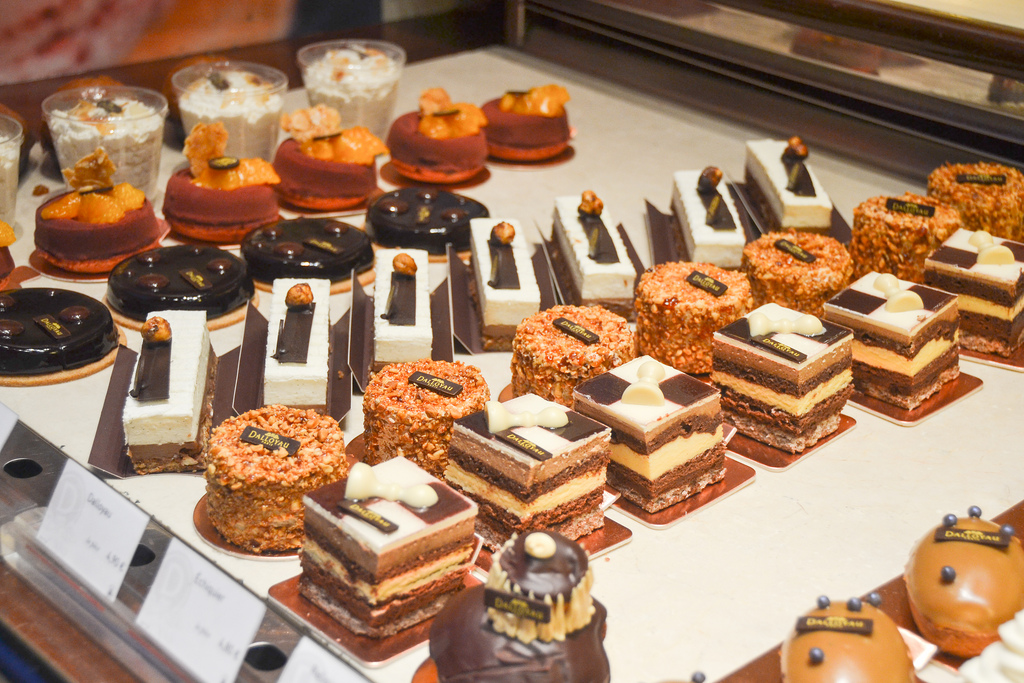 Le Marché des Enfants Rouges is supposed to be the oldest food market in Paris and was built under the rule of Louis XIII around 1615.  The name means the ‘Market of the Red Children’ and refers to the red uniform worn by the children of the orphanage that was located nearby. It is still marked by a small iron gate off the Rue de Bretagne and houses a wealth of stalls from fresh flowers and vegetables to Vietnamese Pho. I loved it. It was vibrant even early in the morning when I popped in for these chouquettes. 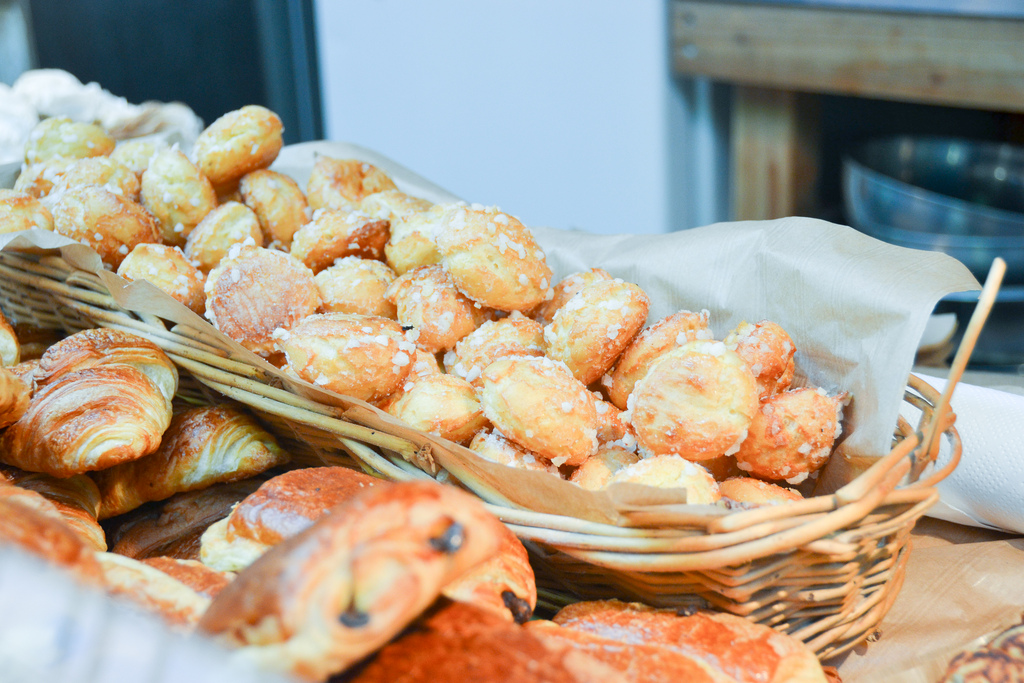 Chouquettes from the baker at Le Marche des Enfants Rouges

This boutique patisserie and confisserie describes itself as a ‘far cry from pastry shops’ and it is indeed.  I felt I was in an art gallery. There were tall cylinder vase displays of the seasonal signature ingredients. One ingredient per vase – verbena, kaffir lime, fig, pear and almond.  Underneath each of these were further vases housing a creation within the theme.  I opted for kaffir lime macarons and a verbena flavoured St Honore.  The macarons were awful. Dry and flaky shells with a filling that was hard and chewy.  They did not melt in my mouth like the La Duree and I tasted no kaffir lime either.

The St Honore was the complete opposite.  It was topped with a verbena leaf delicately dipped in white chocolate. Crunchy and delicious.  There was the tiniest taste of verbena in the whipped cream but the creme patissiere contained all the flavour.  The presentation also was unusual, boutiquey and modern.  I would certainly recommend this place. 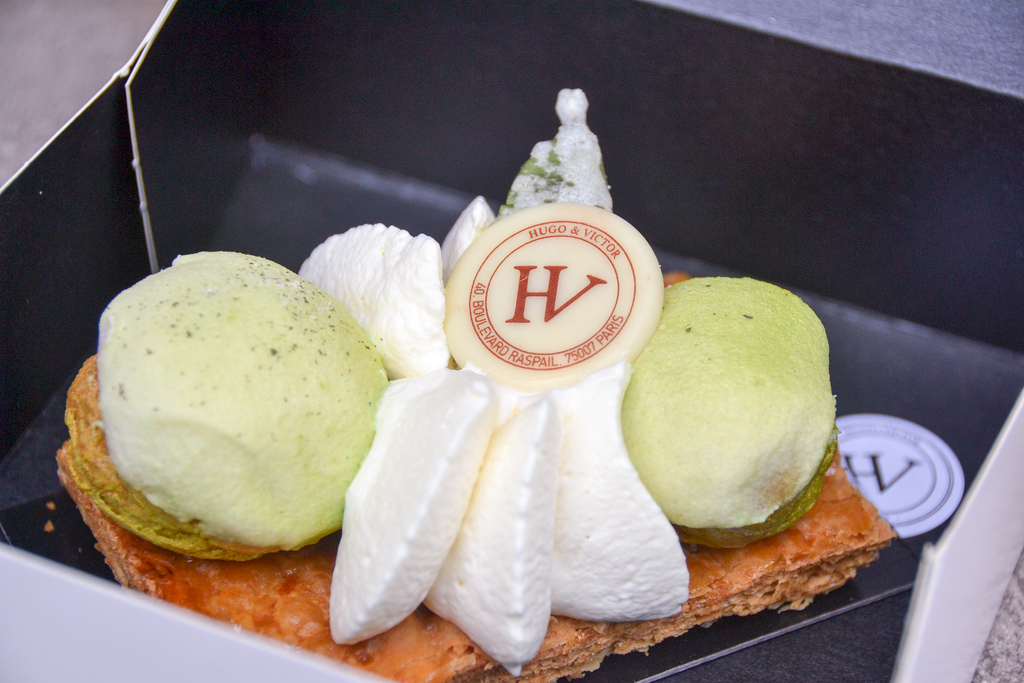 Having lived in Japan for a few years I was keen to explore this chef’s creations.  His mission is to keep it simple. He says he is all about “Creating something delicious.  To achieve this goal, it is essential to maintain simplicity”.  I think that could actually be a Haiku if it were written in Kanji.

Poetry aside, his creations are stunning.  The sesame eclair was rich with a voluminous pastry cream that had a thick sesame paste running through it.  The eclair pastry was crisp and the layer of icing on the top sprinkled with sesame seeds sprinkled on top just set it off perfectly – visually and for my tastebuds.

I have also been eating his macarons every evening, savouring a flavour at a time.  Last night was the turn of the ‘violette’ which was as delicate and floral as you would expect.  I have wasabi, green tea, sesame and rose to go.

Next time I will visit his tea room as I would have liked to have tried his Yuzu Millefeuille and Yuzu flavouring in the Tart au Citron.  I am a huge fan of yuzu which is a cross between a lemon and a lime.  It works so well with baking. 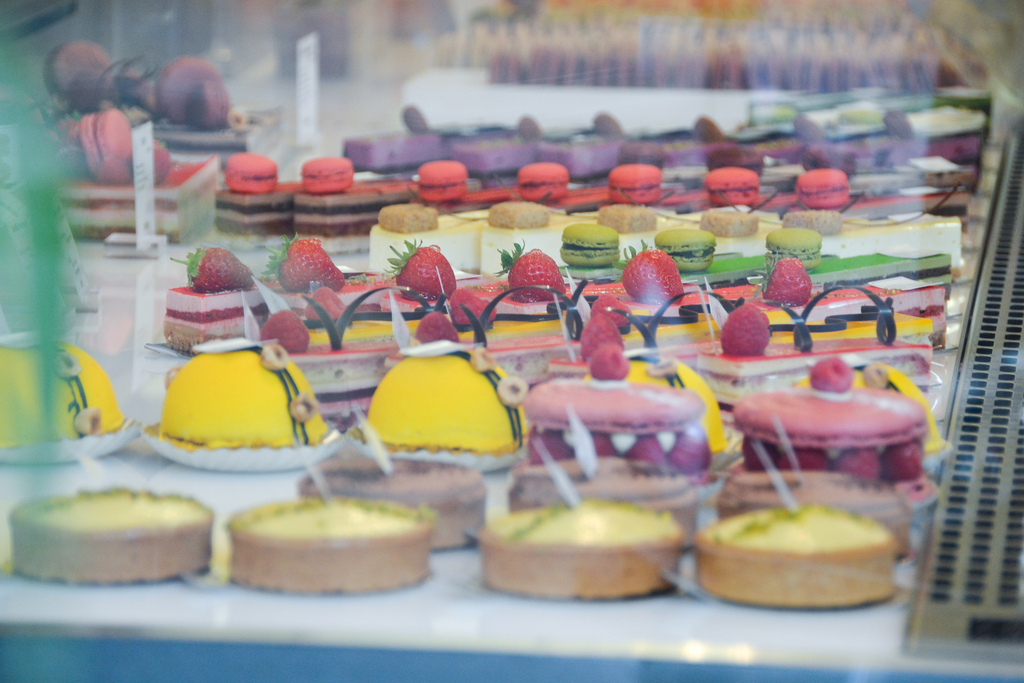 These are a mere sample of my favourites from the trip. There were so many more, almost on every corner.  In fact this glorious pink display with a flawless Frasier was in a tiny shop near the Gare Du Nord. 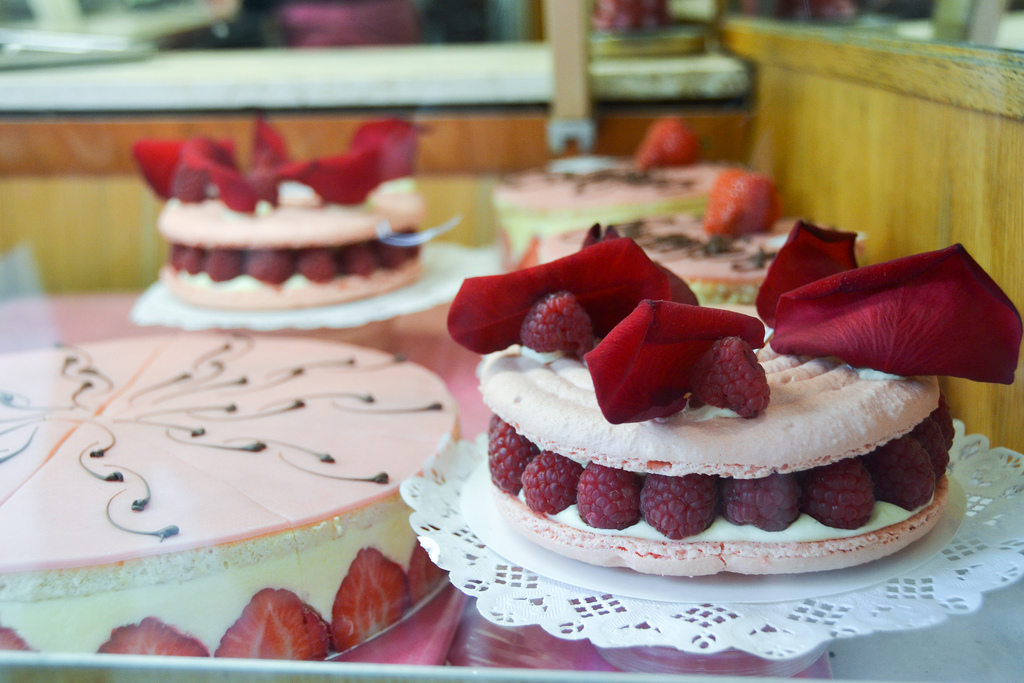 I travelled courtesy of Eurostar as part of their new campaign.  This is my patisserie story and I will be sharing a few more in the coming weeks.  You can share your own stories on their microsite and find my tweets and instagram pictures as well as many others under the hashtag #wheninparis.

Have you been to Paris? What were your highlights? What is your favourite French pastry?  Which of the above would you like to dive into?