On my recent trip to Morocco fitting in a cookery class was at the top of the list.  It’s a cuisine I’m not too familiar with and to be honest have not had many good experiences with on previous trips.   I did a fair amount of research and found many half day workshops at various riads in Marrakech and Fez.  A lot were meat based and so I settled for L’Atelier Madada on the beautiful coastal town of Essaouira.

We arrived at 10 and started with a traditional cup of mint tea.  This is a daily ritual for all Moroccans and it was insightful to learn how to make it well.  The tea was too sweet for me but it was a nice way to start the class. 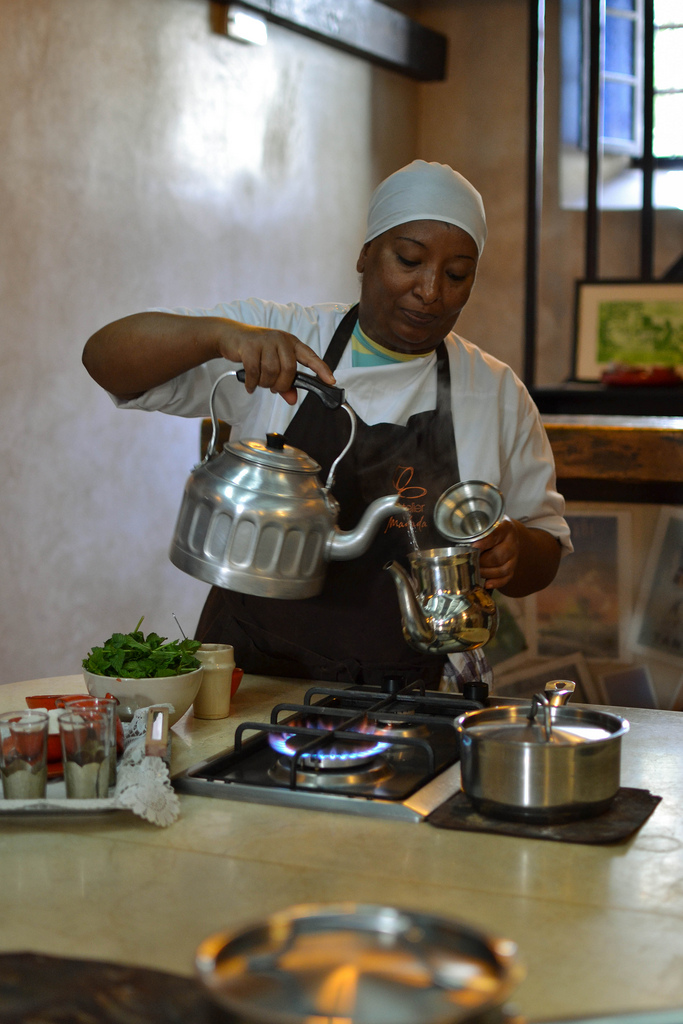 The school is next door to the restaurant and as my daughters played with their newly made friend Yasmin, we set about making the base ingredient for our Sea Bream and Vegetable Tagine – Charmoulla.  This is a paste made with parsley, coriander and spices and can be used as a dip or a salad dressing as well as a rub which is what we would be doing. 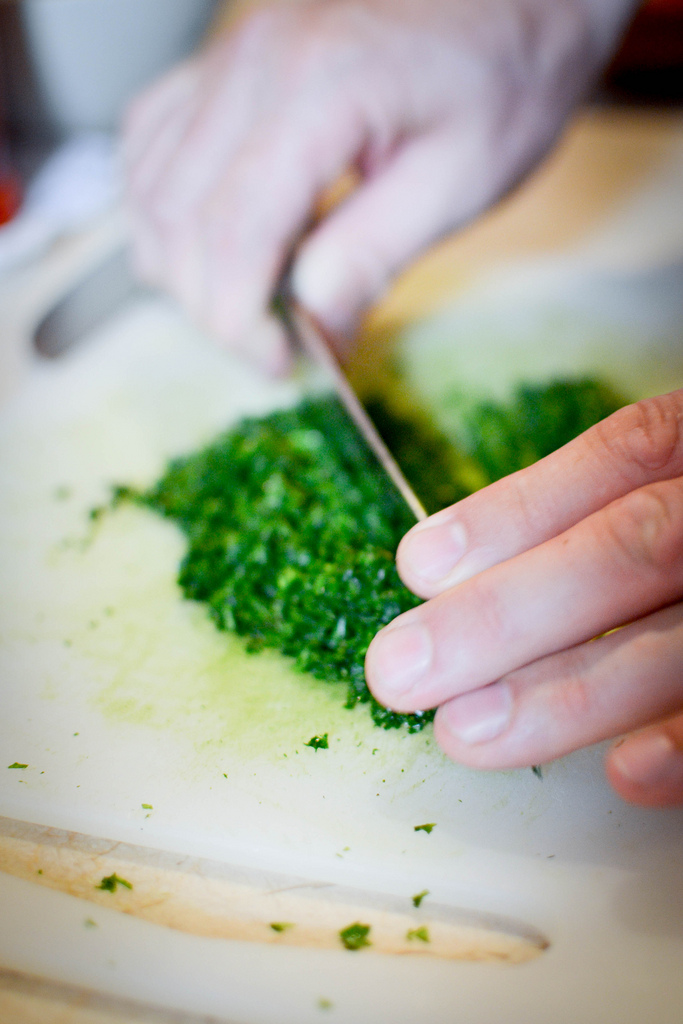 Contrary to what I thought, charmoulla is not made in a pestle and mortar but starts with very finely chopped coriander and parsley 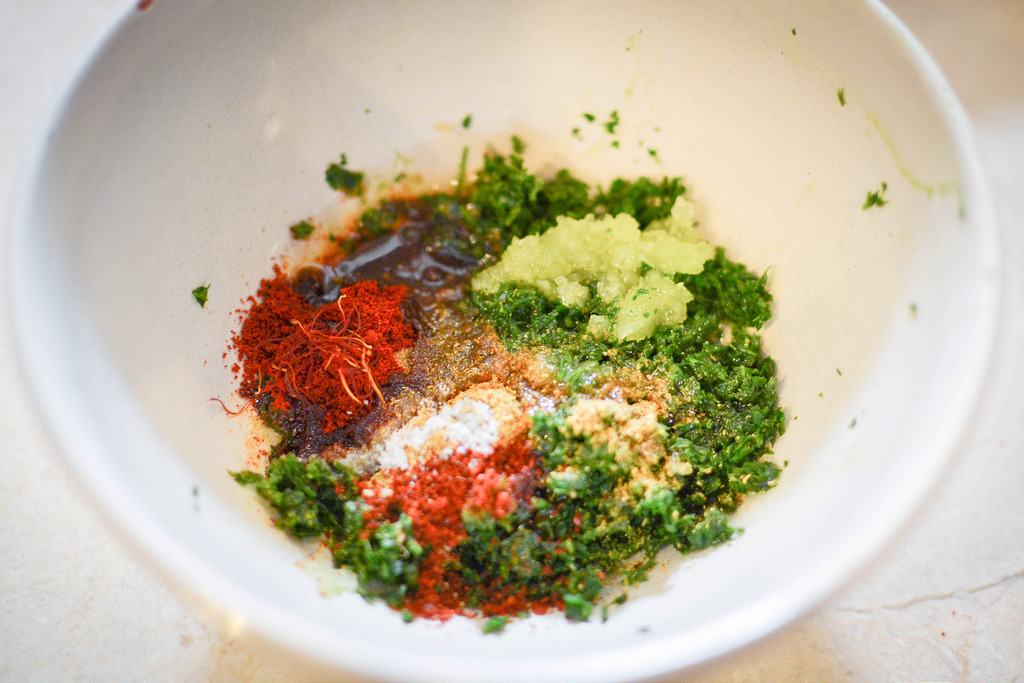 Spices, garlic and olive oil are then stirred in

Our teacher Muna comes from a long line of ‘dadas’.  These incredibly talented ladies were chefs to the private households of the rich and are still seen in many a professional kitchen.  Muna spoke French and a little English – enough to tell you something was wrong or need changing.  She demonstrated a step and then we all copied so the pace was of the slowest learner. 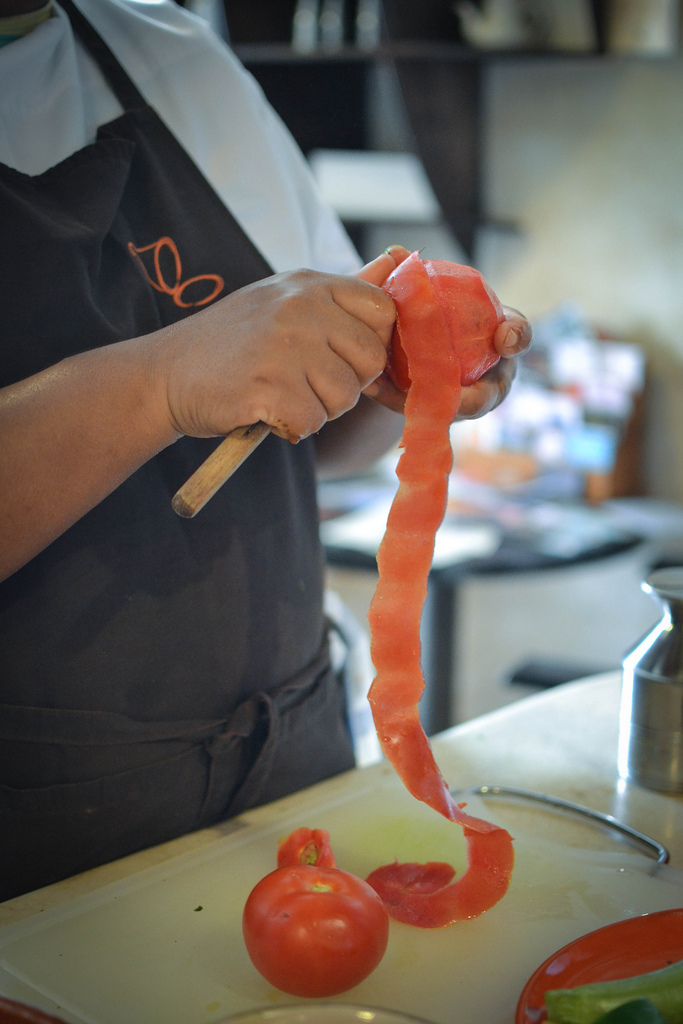 Muna demonstrates how to make roses from tomato skins 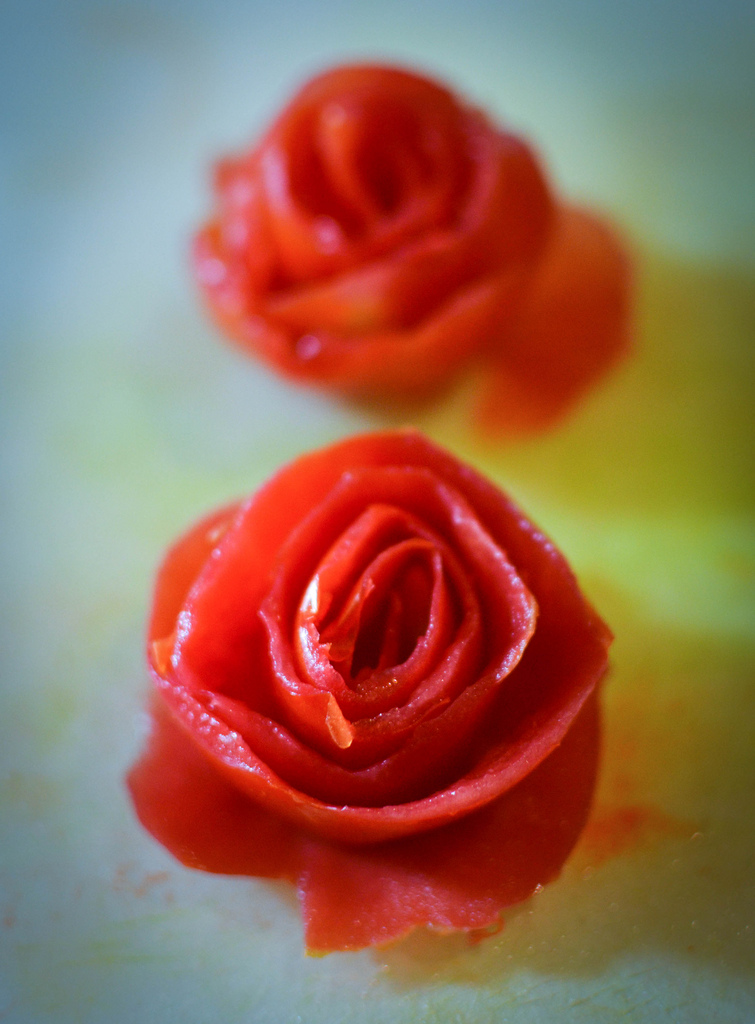 Once the charmoulla was made, building the tagine was really much simpler than I thought.  The vegetables are coated in the charmoulla and then layered starting with the one that takes the most amount of time to cook.  So in our case, carrots, then potatoes, then tomatoes and fish and finally the beans and a piece of preserved lemon.  So easy! 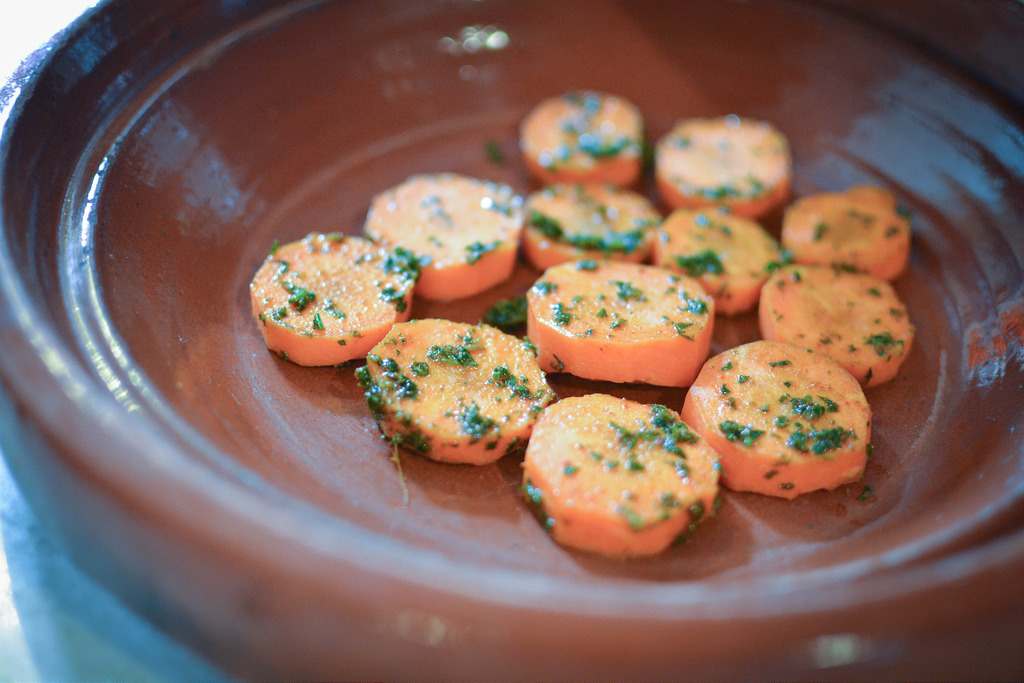 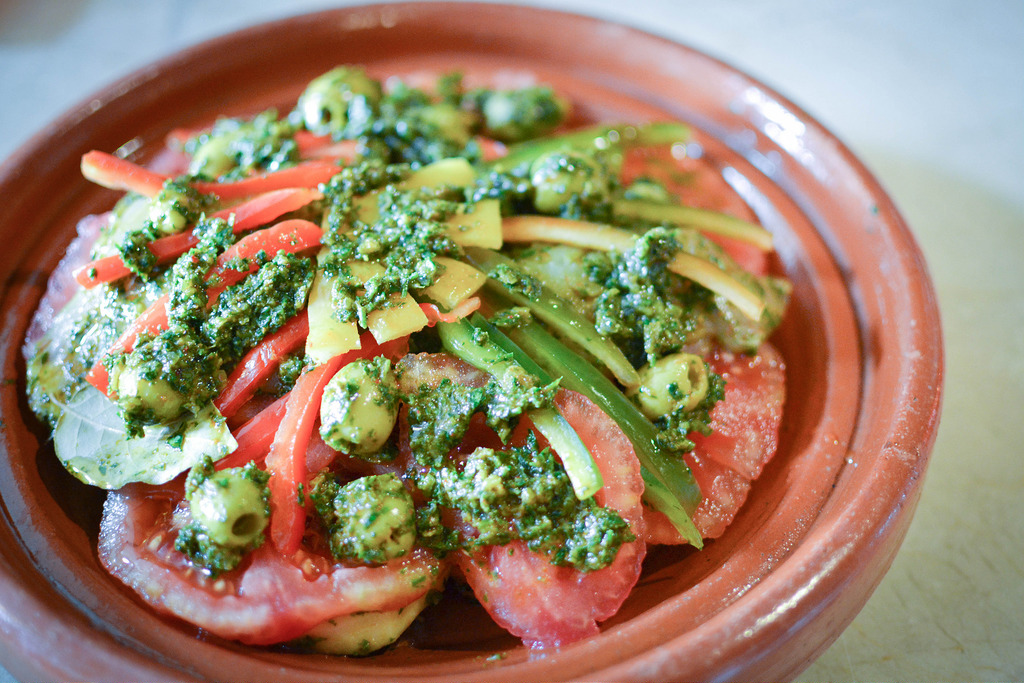 As we layered up our tagines, Muna took us through some tips on buying one.

A simple side dish with courgette

Our tagines would cook for about an hour.  This surprised me because fish cooks quickly but Muna explained that it takes some time for the steam to build inside the tagine so the fish would actually only be cooking for about 15 minutes. 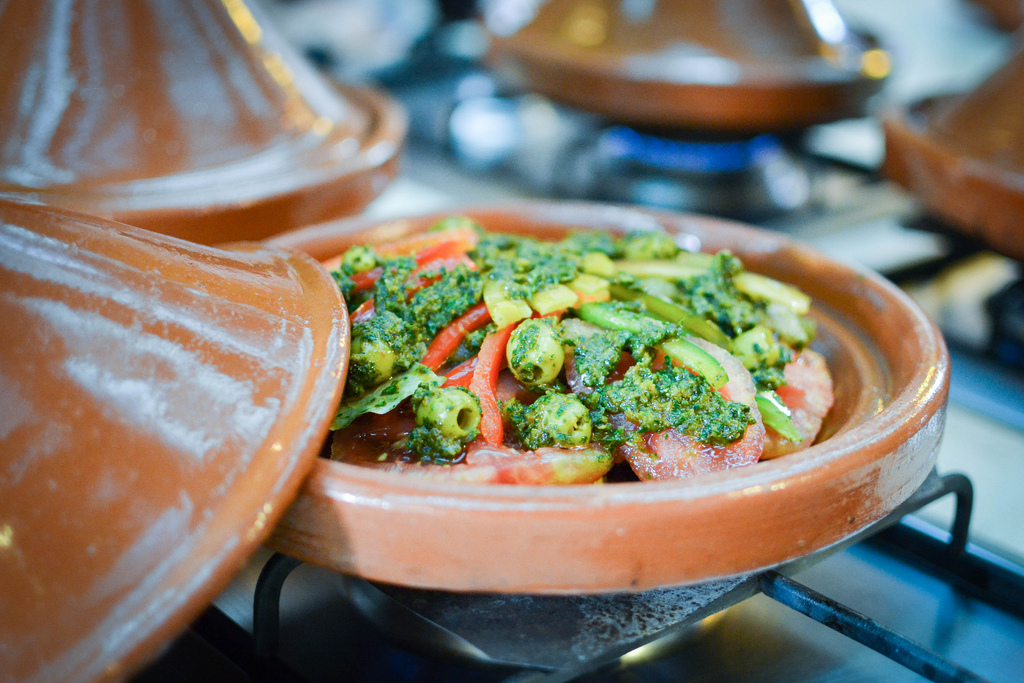 In the meantime, as we all had some charmoulla left, she taught us how to make a simple side dish of Courgettes with Charmoulla.  I was chastised for adding a little too much olive oil.  All the better for mopping up I said! Muna did not smile. 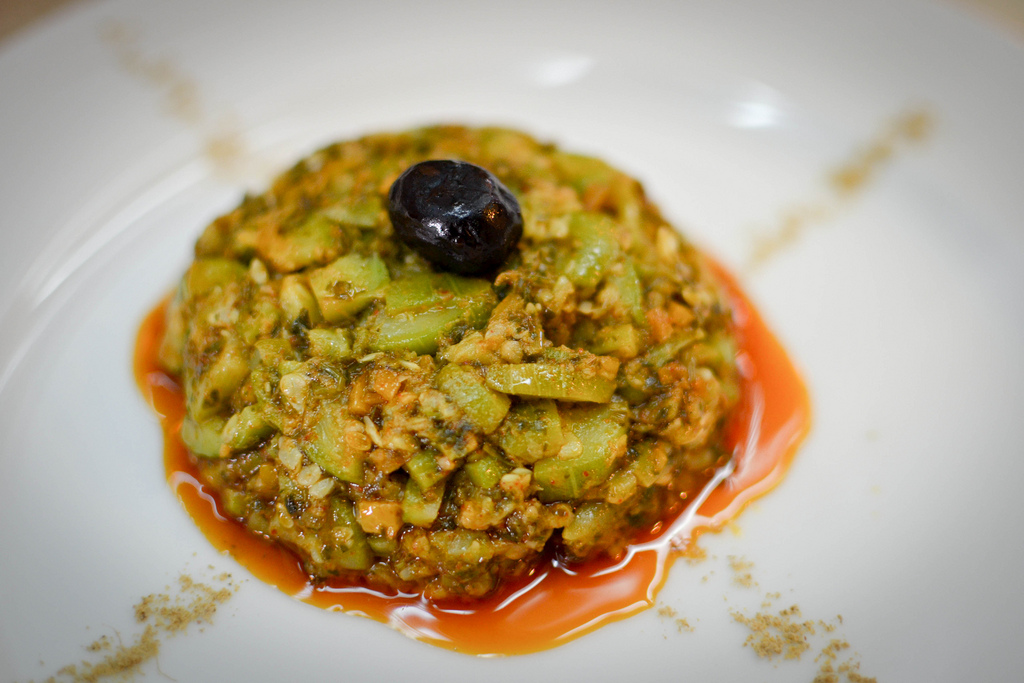 A side dish of courgettes cooked in charmoulla

We then went for a tour of the food souks which was a nice chance to get out in the sunshine and experience the wonderful sea breezes coming in from the Atlantic ocean.

Sea Bream and Vegetable Tagine mopped up with freshly made bread

We returned to the cool restaurant and our tagines had been neatly set at the table with a basket of bread.  I learned that tagine is never eaten with couscous as many Westerners think.  Couscous is a dish in it’s own right and not an accompaniment like rice.  I was grateful because despit being hungry there was no way I would have been able to finish this tagine and a plate of couscous.  It really was the best Moroccan dish I had ever tasted.  My husband’s was very different to mine as he had added a touch more chilli powder into his charmoulla.  The flavours were gentle and complimentary.  I could taste the cumin and the herbs as well as the distinct preserved lemon.  There was just the right amount of liquid to mop up at the bottom.  My favourite part was however the slightly burned carrots.  A smoky taste that I think would be more intense had we cooked these the traditional way – on charcoal. 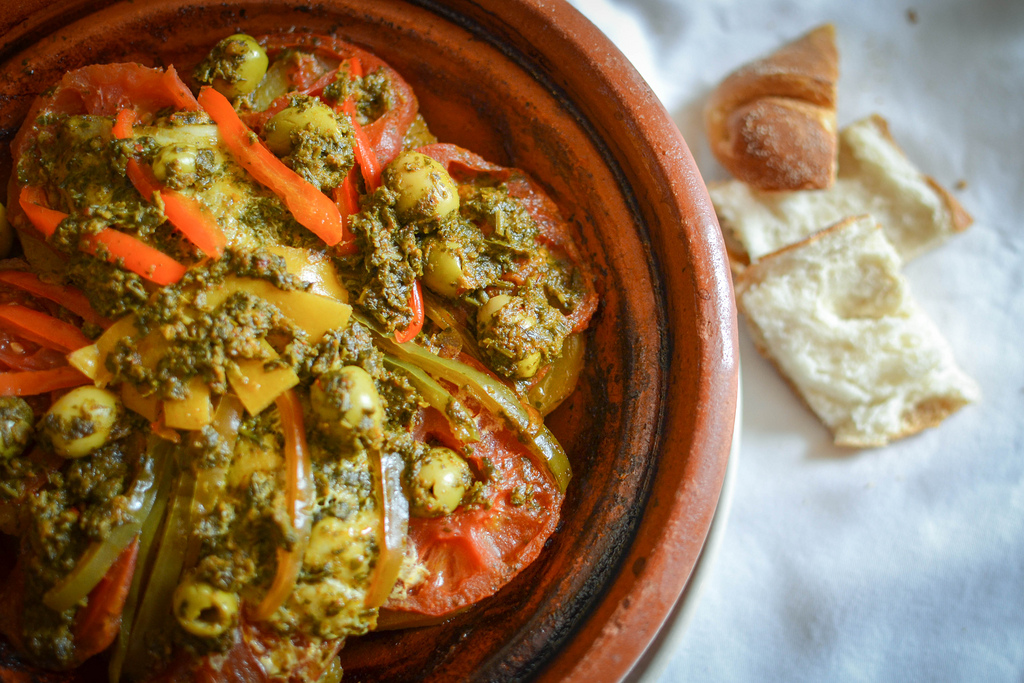 It had been a wonderful morning of cooking and learning.  Muna was a wonderful host with a dry sense of humour who shared not only her recipes and cooking tips but also when prompted stories about her life as a dada.

We paid 450 Dirhams (30) each for our course .  This included all the tuition, tea on arrival, the food and drinks with lunch and a tour of the souk.  I look forward to returning one day when my girls are a little older and can take part too.

L’Atelier Madada is near the clocktower in the walled city on 5 bis, rue Youssef el Fassi.  To book call : +212 5 24 47 55 12 or email : info@lateliermadada.com.  Thank you to the team at L’Atelier Madada for making us so welcome.