I had heard great things about Asma’s supperclub from many friends on Twitter so when she invited me to come along on a very cold and windy winter’s day I was delighted to accept hoping the heat of the spices would spark some inner warmth to ward off my impending cold.

As soon as I arrived I felt warm. Asma greeted me like an old friend and guided me to a table of fellow supperclubbers. She stayed and chatted to us all briefly explaining the Feast to come. And what a feast it was. 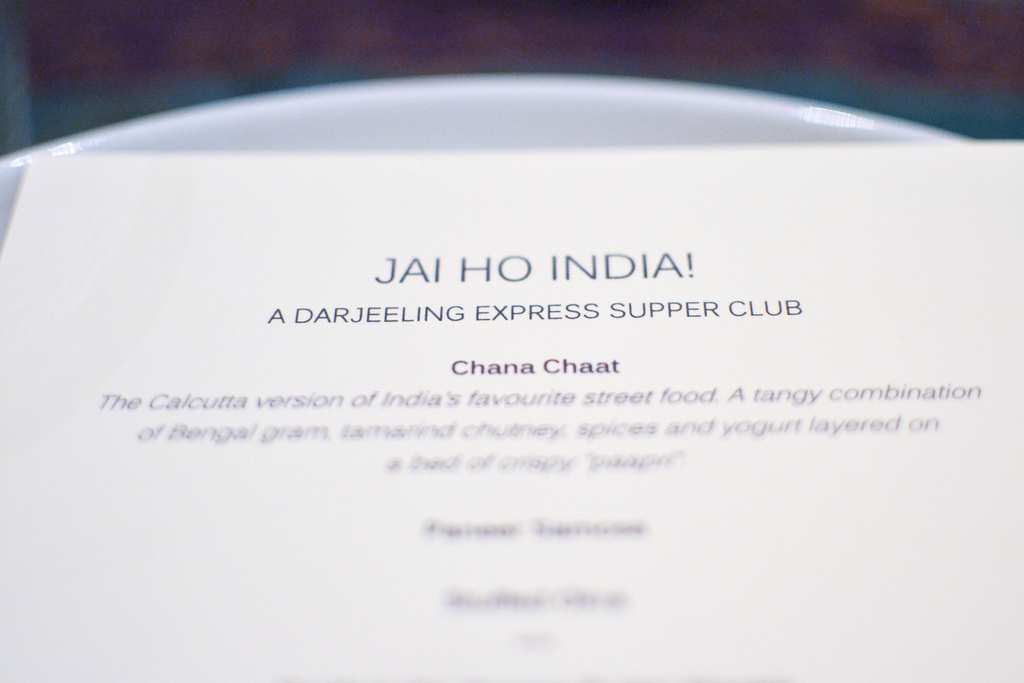 We started with Chana Chaat – dark brown chickpeas coated generously in Asma’s special tamarind chutney and then layered with yoghurt.. This was served on top of crispy ‘paapri’ which are strands and shards of deep fried chickpea batter. They provide a wonderful crunch and saltiness to the sweet and sour tamarind. Despite the fact that this is a street snack, it’s very rich and indulgent and a meal in its own right. 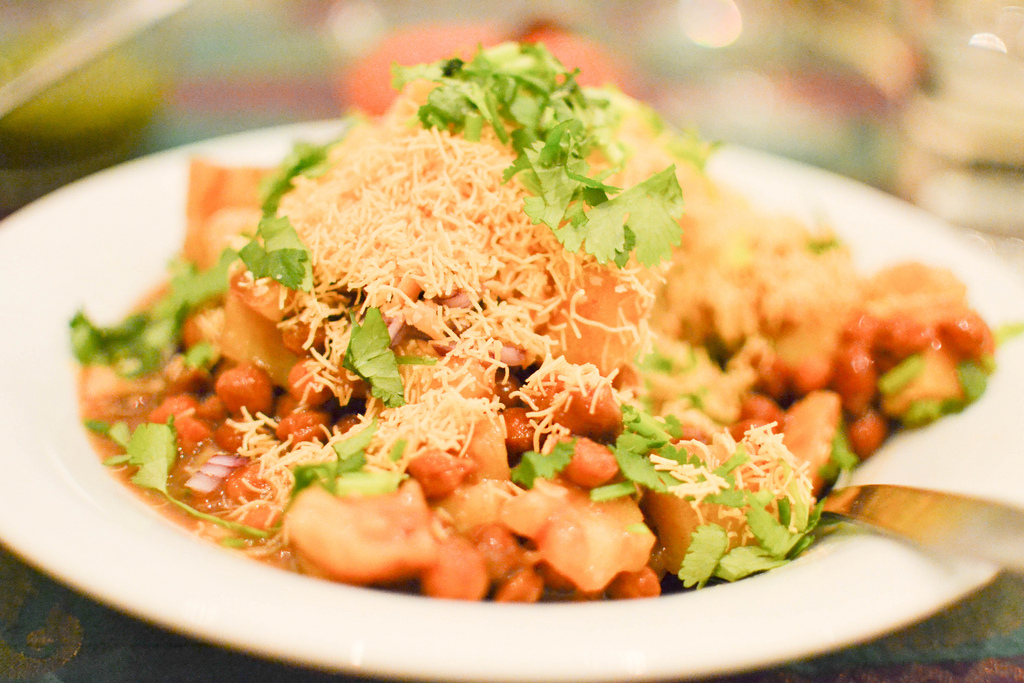 Next came a platter of freshly fried Paneer Samosas. The is nothing better than biting into a freshly fried samosa and I was excited and salvaging as the platter passed around the table. Impatient to discover the paneer filling as I have only ever eaten vegetable versions. I took a bite and somehow ate three in a row, each dipped into a different chutney. One red chilli, one tamarind and one coriander. All delicious with varying degrees of tingle on my tongue.

Our final starter was Stuffed Okra which was homage to one of my favourite Gujerati dishes. Asma’s version was crispy and dry fried with cumin – perfect for dipping. 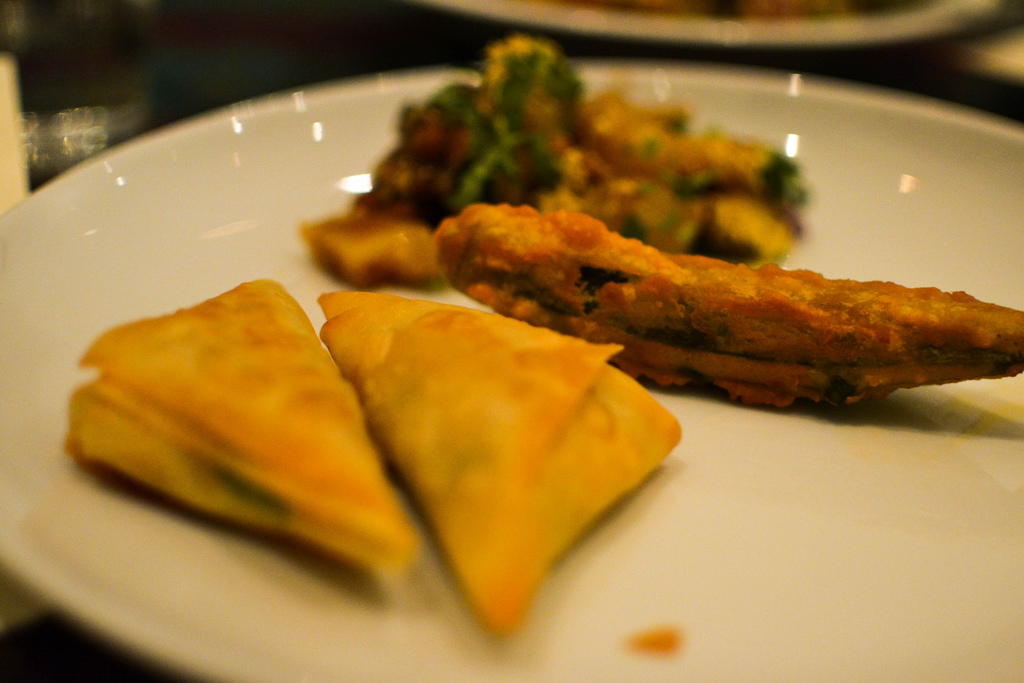 There was a natural break as plates were tidied and glasses were filled. As a Muslim Asma doesn’t drink alcohol but is very accommodating to those wishing to bring wine and beer. I had not brought anything so I took advantage of her stash of Thums Up to make my experience truly Indian.

Our main courses came quickly one after another and there was barely room on the tale for Asma’s generously piled platters. We indulged in creamy Paneer Butter Masala from North India. This was cubes of rich paneer cheese which had been tossed in spices and simmered in a tomato and cream sauce. It melted too easily in the mouth. 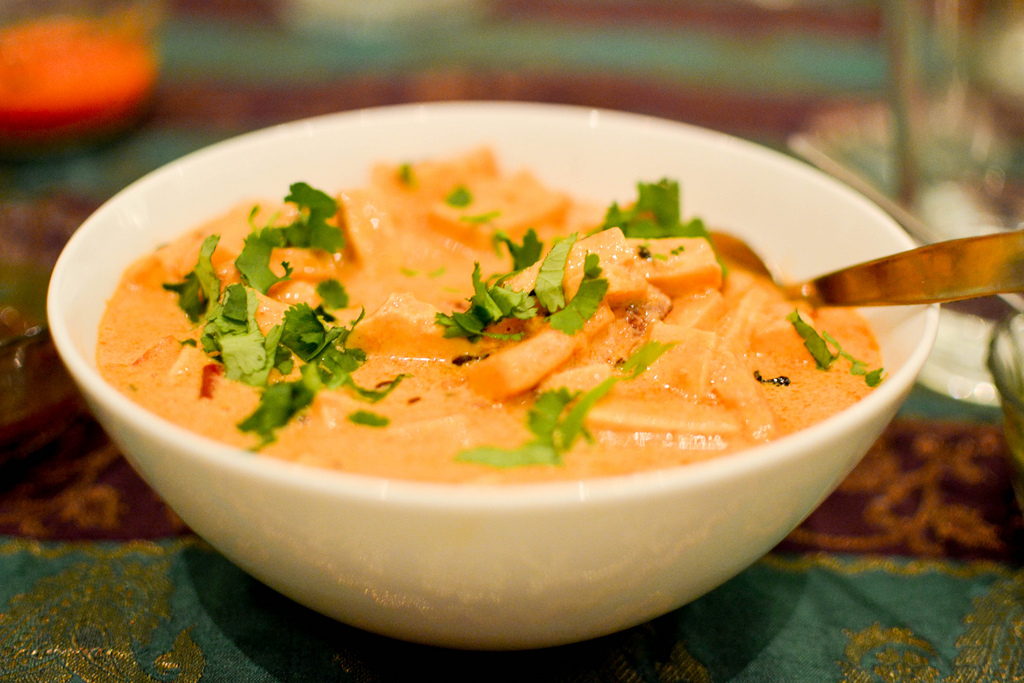 As a complete contrast we also had East India Mixed Vegetable Niramish. A new one for me but perhaps familiar to those of you who go to British curry houses. 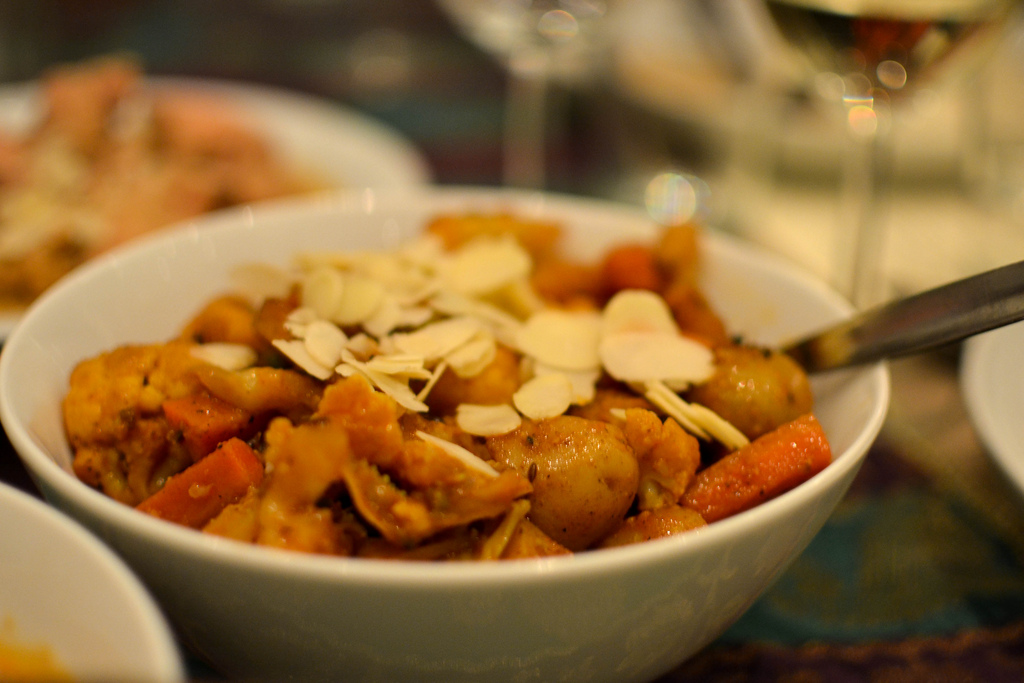 This, alongside the West Indian Spicy Green Peas, gave me satisfying kick at the back of the throat and had me reaching for a glass of water. Flavourful but not a spice mush. All the vegetables were crisp and delicious in their own right. 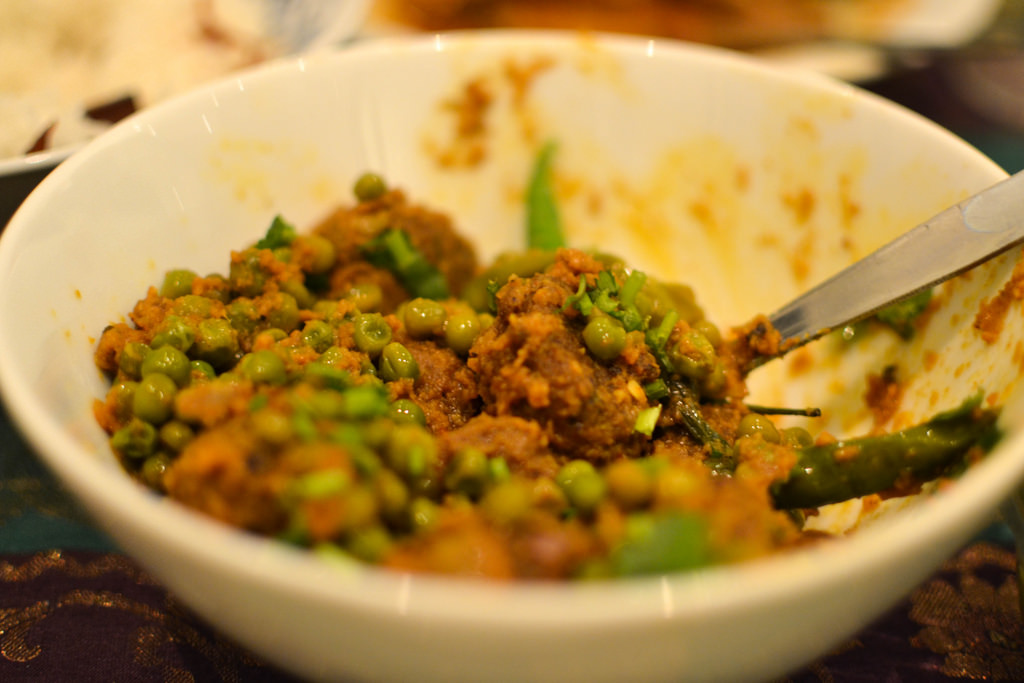 My ultimate favourite was the Dosa Aloo from South India – potatoes with mustard seeds, curry leaves and cashew nuts which were softened by cooking. Traditionally this is the filling for the enormous ‘dosa’ or rice flour pancakes found on street corners across the state of Kerala. There were no dosa at Asma’s but nonetheless these were delicious with rice and a generous dollop of the green chutney. 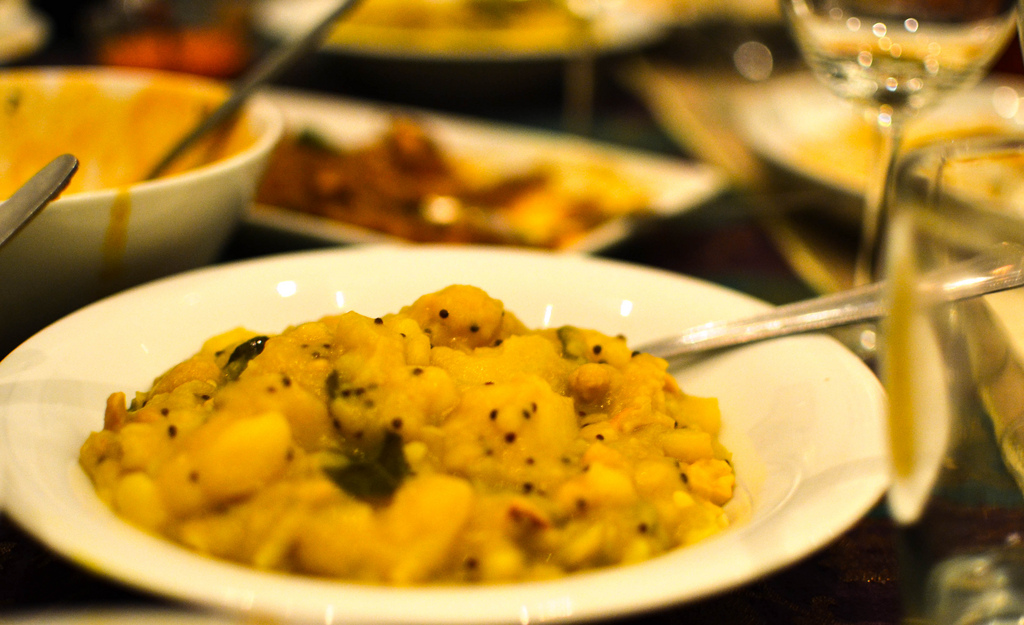 This would have been quite enough food to make the £35 donation an utter bargain but Asma then brought out Channa Dhal and Baingan Bhaja. She is after all an Indian woman and Indian women like to feed. It’s just inherent in our blood.

I barely had room left for dessert but the cardamom fragrance from Khoobani ka Meetha was irresistible. Asma had sourced Humza apricots from Afghanistan. Sun dried naturally for hours, these little amber gems were tastier than any I had eaten. They had been simmered in a sugar syrup with cardamom and topped with a handful of pistachios. I think they would be perfect as a meringue pie filling so must coax the recipe out of her one day. 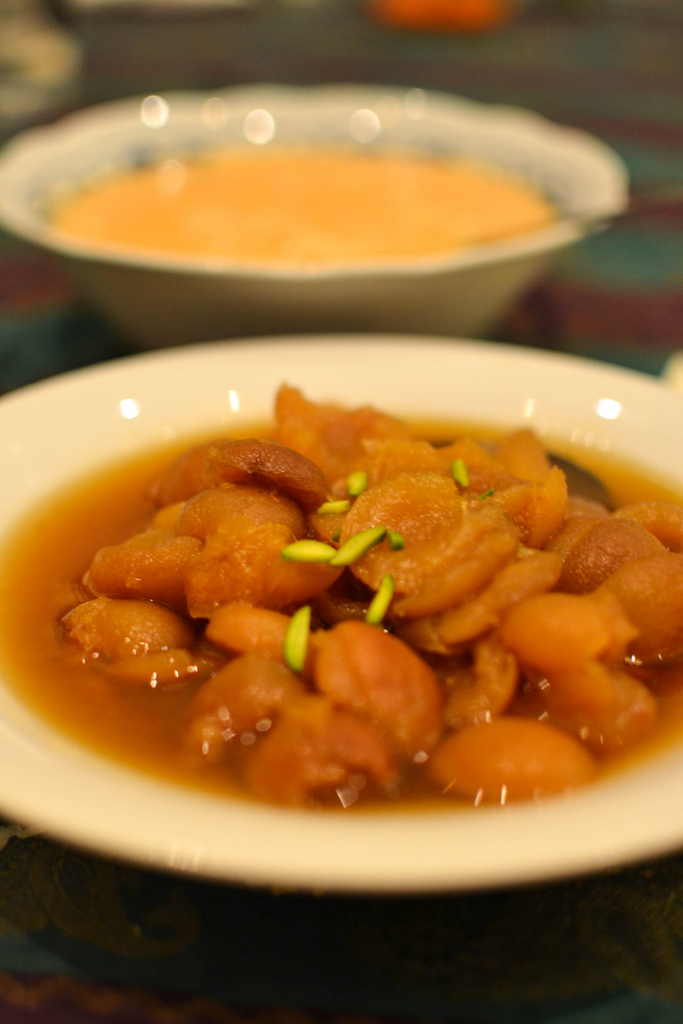 It had been a stunning evening and I was lucky to have been in the company of people I instantly clicked with. I’m not sure if all supperclubs manage to achieve this ambience. The only other I have been to is Sabrina Ghayour’s Persian Feast which I left equally full. Asma does a great balancing act of being a host and being the chef but she has a great team in the kitchen who make it all look and feel so effortless.

All that remains for me to say is go.

Go to the next one which is in 27th April 2013 at Cinnamon Club, London.
You will eat like a maharani. You will then eat like a maharaja and still find yourself strangely waking up with hunger pangs for Paneer Butter Masala in the morning so take advantage of her offer of a doggie bags!

Thank you to Asma for welcoming me as a guest to her supperclub and her home.

Previous Post: « To Feed – The Core Quality Of A Mother
Next Post: The Amalfi Coast : Katie and Giancarlo Caldesi »